Only Murders in the Building; Sherwood; Ellie & Natasia; Everything I Know About Love

“Not since the great Moonlighting of the 1980s has a TV comedy been so joyously, goofily self-aware” 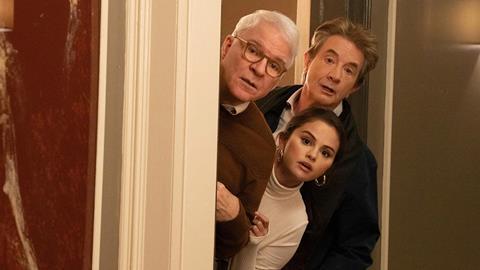 Only Murders in the Building, Disney+

“Only Murders is a many-layered cake, a Bake Off finale showstopper, and this second season adds tier after tier. There are flashbacks and period episodes, and still, there is room for slapstick involving a knife. The brilliance of this show is that you want to solve the mystery as if it were a thriller, but you get all the pleasure of it being a comedy, too.”
Rebecca Nicholson, The Guardian

“This series, which was a slam-dunk hit last year, continues to riff generously on the global thirst for true crime stories and have a ball. Not since the great Moonlighting of the 1980s has a TV comedy been so joyously, goofily self-aware. The trio’s sparring is spot on, Martin and Short’s brilliant comic timing in particular serving to highlighting the only real duff note — Cara Delevingne’s dreary, sapphic artist Alice, who has designs on Mabel. It’s one celebrity casting too many.”
Ben Dowell, The Times

“The second season of Only Murders in the Building follows much the same formula as the first – neighbour is slain, Charles, Mabel and Oliver set about catching the killer. But something feels different – the characters are more lived-in, their quirks more fleshed out, and the concept of the show feels more assured. Where Only Murders in the Building goes from here will be the show’s true test, and I fear that its purposely cheesy shtick might start to wear thin. But at least for now: a knotty murder mystery with an abundance of dad jokes and a beautiful New York backdrop – what’s not to like?”
Emily Baker, The i

“The six-part series didn’t falter in its intricate plotting, attention to detail or its perfect evocation of place. It has put psychological acuity, inner suffering (oh, Andy …) and intra-community tensions over the traditional suspense of a thriller or police procedural, though it has had aspects of both running through it. The entire cast has been rightly and unanimously lauded. They all had a fine script to work with and glorious direction that made it even more than the sum of its parts.”
Lucy Mangan, The Guardian

“Having flown straight and true for most of its six hours, the finale of Sherwood landed with a satisfying thud, fletches shivering to a neat stop. Sure, there were a few rogue storytelling gusts along the way. But James Graham’s drama of murder, scabs and old wounds in a Nottinghamshire colliery town was that rare beast: a TV show as emotionally involving as it was intellectually engaging. In the clarity of its storytelling, and the authenticity of its atmosphere, Sherwood split the bullseye: the best BBC drama of the year so far, and I’d hazard some time to come.”
Alex Diggins, The Telegraph

Everything I Know About Love, BBC1

“This is meant to be a modern-day version of Bridget Jones’s Diary, lamenting how difficult it is for nice girls to make good choices in the era of dating apps. But it feels painfully literary and staged. The characters are so cushioned and privileged it’s impossible to worry about any of them.”
Christopher Stevens, Daily Mail