“What with all the speeches about empowering young girls, the first episode could have done well as a recruitment film. It certainly didn’t do well as a drama.” 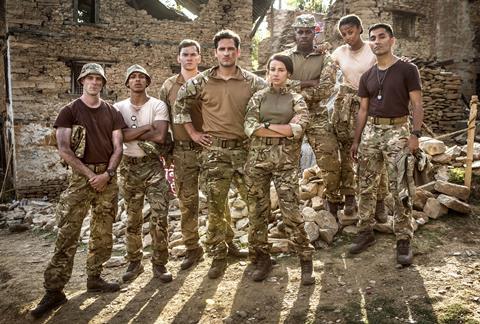 “Does anybody take orders in Our Girl? They all seem insubordinate. I don’t know how Capt James can stand it. Probably because they’re all so good-looking.”
Sam Wollaston, The Guardian

“In Our Girl, the banter is relentless. It is everywhere. It tumbles out of SUVs and lurks in ration tins. It flows out of jerry cans and sloshes into your desert patrol boots. It’s exhausting. Surely our real troops aren’t this tedious?”
Chris Bennion, The Times

“Despite operating in a disaster zone, Michelle Keegan never looked less than utterly glamorous, with a straight-from-the-beauty salon complexion. Her rag-tag squad, for their part, spent most of the time larking, bantering and mucking about, like a heavily-armed stag party. There was lots of swearing too. Even post watershed, all the f-bombs felt odd on a BBC drama.”
Ed Power, The Telegraph

“Even though they’re part of an international rescue mission, Georgie and her comrades spend most of the time exchanging wisecracks and working out in their makeshift gym. The only rescuing they’ve done so far involved a young goat trapped under rubble. For a disaster zone, it all seems rather peaceful and idyllic. Still, the story is romantic enough, and it’s less cynical than the Beeb’s other Army drama, The Last Post.”
Christopher Stevens, Daily Mail

“What with all the speeches about empowering young girls, the first episode could have done well as a recruitment film. It certainly didn’t do well as a drama, the important messages drowning out every bit of action.”
Matt Baylis, Daily Express

“The parallels became so blatant as Russia 1917: Countdown to Revolution went on that I just wanted someone to come out and say it. There was fake news (of sorts). And an elite who couldn’t believe a populist would beat them.”
Sam Wollaston, The Guardian

“There was some mild academic banter with Russia 1917: Countdown to Revolution. Sadly the three were not in the same room, thrashing out Russian history in front of a live, baying audience, but providing erudite commentary — alongside Simon Sebag Montefiore and, yes, Martin Amis — on the 245 days between the February and October revolutions.”
Chris Bennion, The Times

“What would be the hardest part? Sourcing food, shelter and warmth? No. ‘Two weeks of being anonymous’. Imagine the torture of being in a helicopter/on a speedboat/hiding out in someone from Dire Straits’ house and not being able to post it on social media.”
Sam Wollaston, The Guardian

“Hunted is a fraudulent show. The producers admit as much at the start, with a confession that all CCTV footage, number-plate recognition software and mobile phone tracking is ‘replicated’. Faked, in other words. The celebs are tasked with staying on the run for two weeks to raise money for cancer research. It’s a high-risk challenge — within a fortnight, no one will remember who they are anyway.”
Christopher Stevens, Daily Mail