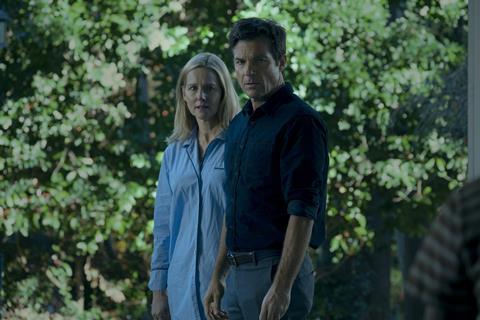 “The first seven episodes of the fourth season make for couch-gripping TV and are a masterclass in tension before the show’s finale. It’s a testament to the writing, direction and fantastic acting that a series about admin and business deals – though admittedly more dangerous than filing a tax return – is so enthralling.”
Emily Baker, The i

“Jason Bateman continues to excel as slimy everyman criminal Marty Byrde. Byrde is a classic small screen anti-hero in the tradition of Tony Soprano and Breaking Bad’s Walter White. What’s different about Ozark is that this clichéd ‘bad man’ has at his side an even more ruthless woman. She is Marty’s wife Wendy and is portrayed by Laura Linney with a sub-zero ruthlessness far creepier than Bateman’s toxic cheer. Ozark’s long farewell is certainly off to a gripping start.”
Ed Power, The Telegraph

“If one of the great pleasures of Ozark is that strong women motor the storyline, none of them is a role model. Even Ruth, who is Ozark’s token moral conscience, her every compunction subtly registered in Julia Garner’s impressive performance, is like everyone else: pursuing Ozark’s version of the degraded American dream – profiting from evil without consequence, then blowing town with a bank account swollen by drug money.”
Stuart Jeffries, The Guardian

Fraggle Rock: Back to the Rock, Apple TV+

“Thankfully, the remake has not tinkered with the formula. Everything is present and correct. It’s a kids’ show that adults can happily watch. It’s exuberant, inventive, wholesome without being cloying, and a good deal better quality than many things to be found on Netflix and YouTube. Introduce this show to the children in your life.”
Anita Singh, The Telegraph

“Nostalgia for nostalgia’s sake is the enemy of good television. But Back to the Rock captures the essence of what made the original Fraggle Rock so special. The songs are captivating, the tone joyously chaotic, the puppets gloriously squishy and largely free of distracting digital effects. This is a furry fantasia that has stood the test of time. And viewers young and old alike are sure to get a thrill throwing themselves into its velvety embrace.”
Ed Power, The i

“It showed, entertainingly, how Warhol turned his horror of modern mass consumerism into art; art that was mass-produced, prompting more mass consumerism. ‘Warhol saw America for what it was, with everything for sale,’ the voiceover told us, and it was right that he was a sort of prophet showing us the America of the future, the one we are living now, with Frida Kahlo fridge magnets and Van Gogh phone cases.”
Carol Midgley, The Times

“I can’t remember when a series made me laugh and cry so much in equal measure (actually, I can. It was the previous series of After Life).I eked out the episodes because I didn’t want it to end. It was brimming with humanity and deliciously ‘wrong’ humour.”
Carol Midgley, The Times

“This series of The Apprentice, the 16th, is sharper and more entertaining than it has been for years. Gone is the flabby camaraderie of the past few seasons, replaced by an eagerness to cut each other’s throats. They’re all undermining their rivals without any pretence of co-operation. It’s nasty, but it’s far more fun this way.”
Christopher Stevens, Daily Mail