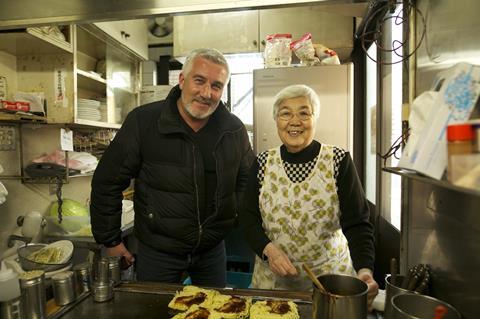 “This is Paul’s first trip to Japan, we are told, but it certainly isn’t the first one we have seen on television. Karaoke joints? Been there. Shibuya Crossing? Seen it. Novelty cat cafes? Over it. Paul swung by all of them in this first episode of three, but his food focus made it fresh. Here, travel companions are necessary, Paul is your classic TV straight man. Many of the episode’s most interesting moments took place when Paul’s mouth was stuffed full of some delicious delicacy, leaving someone else to do the talking.”
Ellen E Jones, The Guardian

“It was good to see Ol’ Blue Eyes out of his comfort zone, a clueless anthropologist rather than the lofty emperor of the Bake Off tent — even if I’m not sure the irreverent stylings of the programme (pop-up animated bits) particularly suited him.”
James Jackson, The Times

“Paul is in Japan to eat,” announced Rebecca Front in her smart-alecky voice-over. But he was also there to do that very British thing of wallowing in blissful ignorance of foreign customs and traditions. For all the intrigue, though, I was left feeling that the Japanese deserved a bit better than having a big lunk like Hollywood crashing around their country.”
Adam Sweeting, The i

“Paul was supposed to be the innocent abroad, out of his comfort zone. But there’s nothing innocent about the hair-gelled baker and he ended up looking simply uncomfortable. Whether he was silently gritting his teeth in a karaoke booth or go-karting with a cross-dressing wrestler called Ladybeard, Paul never lost the uneasy air of a man who has travelled halfway round the world to make a show he doesn’t understand. The concept of wry, self-deprecating humour is beyond him.”
Christopher Stevens, Daily Mail

“There are various museum tours available online, but on BBC Four, last night’s Museums in Quarantine was a cut above. As it glided slowly round the deserted Rembrandt exhibition at the Ashmolean in Oxford, the discreet, tasteful soundtrack and fade-ins/outs added up to something like a hypnotic spell; art as mindfulness.”
James Jackson, The Times

“Everybody has an almost mystical devotion to the place, and the collection of beautifully musical Welsh accents helped to lend the programme a hypnotic aura, as if the viewer were being gently absorbed into the village’s mysterious ambience.”
Adam Sweeting, The i