Philly DA: Breaking the Law; Betty; Spying On The Royals

“This double bombshell brought a crime thriller component to the film.” 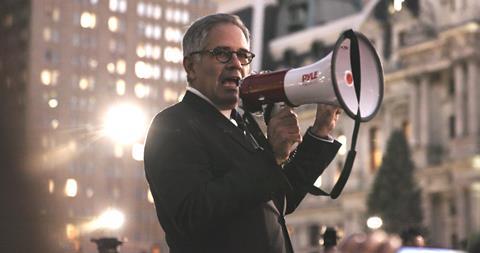 “The trio of film-makers marshal a lot of material consistently well. Each instalment looks primarily at one subject, while continuing to tie it into the wider drive to change the policy of mass incarceration and break the harmful habits of career lifetimes among the remaining old guard. It fills in the city’s history while examining the result. It also looks at the effects of cash bail (which effectively criminalises people for being poor), the need for radical overhaul of a stunningly abstruse and uncompassionate juvenile system, the discovery of “damaged goods” files (secret records of police officers deemed too untrustworthy to testify in their own cases – wiped from employees’ computers but unearthed in hard copy in the archives).”
Lucy Mangan,The Guardian

“There was a dramatic twist at the end as it emerged disgruntled former employees had wiped vital files. And then boxes of evidence against corrupt police officers were unearthed in a forgotten corner of the DA’s office. This double bombshell brought a crime thriller component to the film. Not that Philly DA required Hollywood razzle-dazzle. Doggedly and with admirable attention to detail, it painted a fascinating portrait of a city plagued with social issues and of a lawyer fighting the good fight one small victory at a time.”
Ed Power, The i

“Larry is built up straight away as a great liberal hero of the people.He has sued the police 75 times during his career, and has a bevy of adoring followers who love to chant anti-police slogans, moving the leader of the police union to observe: ‘The bottom-feeders of the city are all gathered in one place.’ This is an officer, a man of considerable bulk, that you definitely wouldn’t care to meet down a dark alley while in possession of liberal views and a ponytail. Larry wins the DA election by a landslide, and — in true dramatic fashion — discovers that running stuff isn’t easy. There is a wonderful moment when he addresses his new staff, and gets a reception that’s about 20c below lukewarm.”
Roland White, Daily Mail

“Betty’s streetwise lingo and achingly hip tattooed teens evoked the woozy spirit of controversial adolescent drama Euphoria. But an agreeable sweetness was sprinkled through. Kirt (Nina Moran) was advised by her reiki practitioner to “free her chakras”, so she became a love guru to her male friends. Meanwhile, Honeybear (Kabrina Adams) initially struggled to understand why girlfriend Ash (Katerina Tannenbaum) was crushing on a local waitress.These plot points often felt like window-dressing. The thrill in Betty came from hanging with women determined to break into the male-dominated world of skate-boarding but on their own terms. As a free-wheeling skewering of the patriarchy, it’s worth staying with all the way through.”
Ed Power, The i

Spying On The Royals, More4

“Spying On The Royals was supposedly about a surveillance operation against the exiled Duke and Duchess of Windsor. At one point, both the British and the Americans were listening to their private conversations during a trip to Florida. Their phones were tapped, and their hotel rooms were bugged. But with new revelations about tensions between William and Harry hitting the news, the main point of interest was that bitter fraternal royal feuds are nothing new.”
Roland White, Daily Mail