“They haven’t adapted the book into a TV series so much as turned it into a perfume ad.” 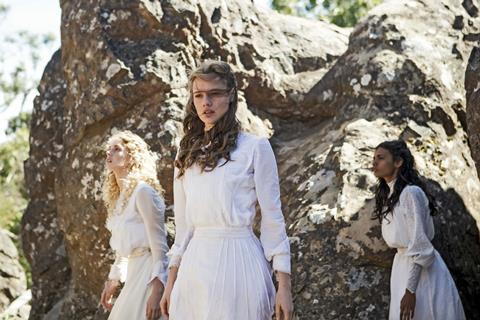 “This new reimagining of Joan Lindsay’s novel is visually gorgeous — indeed, absolutely stunning — but the first episode was so besotted with its ethereal, trance-like form that it occasionally overlooked substance. There’s no denying, though, that this is a feast — a picnic, let’s say — for the eyes.”
Carol Midgley, The Times

“With the girls’ disappearing in episode one, it remains to be seen if this small-screen version can sustain the mystery. Turning a 200-page novel into a two-hour film is one thing. Spinning it out over a six-hour series is a tougher challenge. I suspect it won’t succeed, hence it being buried in the summer schedules.”
Michael Hogan, The Telegraph

“The girls rarely walk anywhere, they glide in slow motion with their tresses bouncing and the sun making haloes around their hair. The music adds a touch of rock video to the whole affair and takes away all hope of it being a tale with substance. They haven’t adapted the book into a TV series so much as turned it into a perfume ad.”
Matt Baylis, Daily Express

“It is mysterious, dreamy, eerie and surreal. But it is more than this. The ‘small-screen’ version is bigger in its outlook than its big-screen predecessor. It has taken a step back to take in more – more time, more of the world. And there are no bloody panpipes.”
Sam Wollaston, The Guardian

“Natalie Dormer is certainly compelling as Mrs Appleyard, and it is shot beautifully – the production sumptuous, the detail immaculate down to the girls’ virginal white, gauzy dresses contrasting with the vivid wilderness of Hanging Rock. But was I left spellbound? Alas, no. Those drawn to a haunting mystery, its chill imprinted long after, will be disappointed.”
Elisa Bray, The i

“Wisely, this version moved briskly, and didn’t delay the disaster. This episode, the first of six, ended with the remaining children stumbling out of thick mist in their white dresses, like ghosts spilling out of the clouds. Magical … and truly spooky.”
Christopher Stevens, Daily Mail

“Stath Lets Flats continues to be silly, slapsticky and guilty of the odd duff line, but three episodes in, I’m still watching, which tells me something. There’s an old-fashioned feelgood comfort to this comedy, even though it is at times excruciatingly awkward to watch and almost everyone in it is an ocean-going tool/moron.”
Carol Midgley, The Times

“This series has a tastefully curated soundtrack and this jazz-tinged episode swung along to Al Bowlly, Bert Ambrose and Lucky Millinder. Cutaway shots of ducks and sheep gave it the bucolic glow of The Great British Bake Off. Intimate and quietly joyous, Gone Fishing is proving one of summer’s surprise TV treats.”
Michael Hogan, The Telegraph