Race Across the World; McDonald & Dodds; Return to Wolf Hall

“Hats off to the production team for finding a bunch of people in crisis. Every pairing is in compelling peril.” 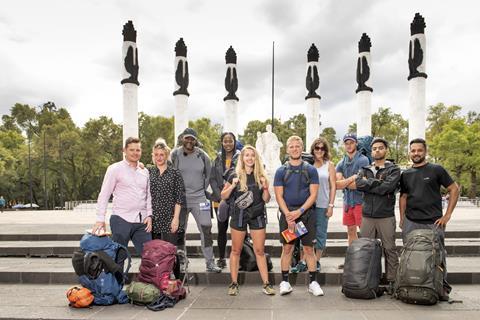 Race Across the World, BBC2

“The contestants are a diverse and likeable bunch once again. The best moments came when the teams took time out from scouring confusing timetables or trying to explain something VERY LOUDLY in broken Spanglish, to admire Mayan ruins or a spectacular sunset and share the moments that every traveller knows make up for all the hassle.”
Jeff Robson, The i

“The appeal of this series has nothing to do with the Mayan temples, natural infinity pools and other Instagrammable blah that the contestants visit. Moreover, its quest is not to discover if the teams can survive jungles, tooled-up bandits and camera crews in their faces 24/7, but each other. Hats off to the production team for finding a bunch of people in crisis. Every pairing is in compelling peril.”
Stuart Jeffries, The Guardian

“The casting is one of the strengths of the series. If last year’s show is anything to go by, we will have a soft spot for all of them by the time they make it to the finish line. As the episode went on, we learned things about them. But this is dropped in lightly, not in an X Factor-sob story sort of way, and we are left to enjoy the race.”
Anita Singh, The Telegraph

“When the schedules are packed with celebrity travel shows, it was wonderful to see ordinary people getting a chance to shine and experience the journey of a lifetime.”
Claudia Connell, Daily Mail

“Saturday’s programme showed a vulnerable side to a very private woman bringing to an end what has been the most exhausting and rewarding chapter in her life. Modest, intelligent and engaging, this documentary was also poignant.”
Claudia Connell, Daily Mail

“Following the author in the six months leading up to publication, it covered her life and career, her research methods and – of course – her fascination with Thomas Cromwell, the working-class Londoner who became a royal enforcer and architect of the Protestant Reformation. Mantel was wonderful company.”
Jeff Robson, The i

“This silly story about diamond heists and addiction dependency made me slightly embarrassed for everyone involved, especially Jason Watkins, an excellent actor reduced to fiddling with his spectacles and following a thread of endlessly repeated gags about McDonald failing to understand the difference between boules and bowls.”
Ben Dowell, The Times

“ITV clearly wants this to be a long-running series, for which it needs two leads with odd couple chemistry. It just about has that. McDonald is a good foil to the eccentric Dodds. The main characters are fun. But it plays out as if writer Robert Murphy spent so much time working on them, he forgot about the small matter of the plots.”
Anita Singh, The Telegraph