Gordon Ramsay on Cocaine; The Ganges with Sue Perkins; H is for Hawk

“The first instalment of this two-part documentary was a triumph” 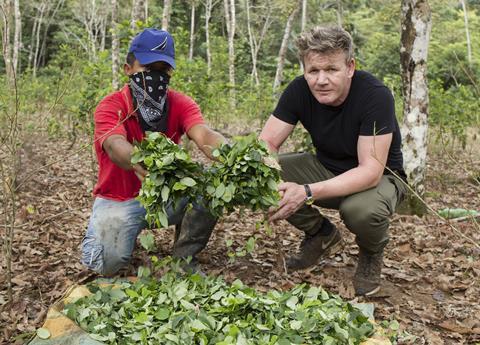 “The first instalment of this two-part documentary was a triumph. Ramsay has his own reasons for wanting to expose the dark side of the business. But these things were not dwelt upon. Here was an informative, unsentimental – and OK, go on then, hard-hitting – piece of television.”
Rupert Hawksley, The Telegraph

“Though Ramsay and investigative journalism initially go together like chalk and cheese, the veteran chef comes into his own when he visits Colombia and observes the cooking process of the Class A drug. Despite Ramsay’s brushes with drugs, however, the whole premise still feels forced.”
Finlay Greig, The i

“Beeping hell, the stuff that goes into it! If the death, misery and war isn’t enough to put you off, maybe the ingredients will. Yeah, Gordon, this really is hell’s kitchen. Maybe you should take Jose and his family back home, give him a job at Maze.”
Sam Wollaston, The Guardian

The Ganges with Sue Perkins, BBC1

“Perkins was warm, sometimes very funny, and completely at ease with everybody she met, from a hermit living high up in the mountains to the owner of one of India’s fastest-growing consumer goods companies. But do we really need yet another celebrity-fronted travelogue? This is Perkins’s third in as many years, for goodness’ sake.”
Rupert Hawksley, The Telegraph

“A title that reeked of yet more ‘presenter-on-a-journey’ and something entirely superfluous if you already sat through Joanna Lumley’s recent gush through India. Yet the trip wasn’t so arbitrary, as Perkins soon made clear. Anyone who has lost a parent may have found themselves suddenly clicking with her trip a bit more closely.”
James Jackson, The Times

“We’ve wondered, here in this column if Sue’s ironic tone is right for anything other than comedy but here she’s like a less nice version of Michael Palin. I mean ‘less nice’ in a good way, in that she doesn’t forget to be funny or friendly but she also doesn’t shy away from the difficulties, physical and spiritual, that she’s grappling throughout.”
Matt Baylis, Daily Express

“The problem for professional luvvies like Sue is that she must abide by the Laws of the Hampstead Dinner Party at all times. And rule number one is that all religion is an unscientific con-trick (except for Islam, which is multicultural and lovely). What a shame she couldn’t surrender to the magic of India and leave her political hang-ups far behind.”
Christopher Stevens, Daily Mail

H is for Hawk: A New Chapter, BBC2

“If Helen Macdonald’s fêted 2014 novel was a howl of despair at her father’s death, this was a warmer, more optimistic love letter to falconry. The film often felt a touch niche, but her writerly descriptions of forests feeling like green ‘underwater cathedrals’ and so on, narrated in a mellifluous murmur, were vivid even for a Natural World.”
James Jackson, The Times

“This heartfelt documentary was gorgeously filmed, but might have been better as a shorter, 30-minute film. Sometimes the best poems are the brief ones.”
Christopher Stevens, Daily Mail