“Not a programme that is going to eat up much of your mental bandwidth. That is a large part of its charm” 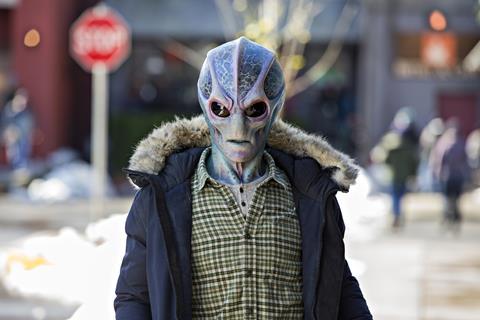 “Resident Alien is not a programme that is going to eat up much of your mental bandwidth. That is, especially under current conditions, a large part of its charm. It’s never purely a fish-out-of-water escapade, nor simply an adult Mork and Mindy. It retains a hint of darkness throughout that means you never quite become complacent. Resident Alien knows what it is doing and does it with admirable sincerity.”
Lucy Mangan, The Guardian

“It’s a nice send-up of various genres, based on the Dark Horse comic books. However, it feels too slight to warrant hour-long episodes and would perhaps be snappier in half-hour bites.”
Carol Midgley, The Times

“It is a fun, fish-out-of-water comedy as Harry he tries to adopt human traits. And if it had stuck to that, it would be a winner. But at times it shifted uneasily into more downbeat territory. The show needs to give us less of that and instead mine the comic potential, because the set-up here is appealing.”
Anita Singh, The Telegraph

“I was baffled until it dawned on me, mid-way through episode one, that the show is aimed at children. And by that measure, it’s entertaining. Young viewers will find much to enjoy. Adults? It will help if you really, really love Richard Hammond.”
Anita Singh, The Telegraph

“It was a corking episode. As the ocean-going tool ‘Charismatic Mike’, Anthony Head was a scene-stealer in his unbuttoned shirt, three-shell necklace, leathery tan and ‘I won this watch off Salman Rushdie’ twaddle. It’s rare that you can say black comedy is pure, soothing comfort food, but here we have exactly that.”
Carol Midgley, The Times

“This was the final episode of his three-part adventure, and he really got into his stride. The weather cleared up, and he found several chatty archaeologists to point out surprising sights along the wall.”
Christopher Stevens, Daily Mail

“This show is a tacky exercise in humiliation humour: the stars endure an hour of mockery, sometimes gentle but with an occasionally nasty edge, as they tackle various intelligence tests and find themselves outsmarted by children and animals. Though barely touched on here, there’s an interesting idea to be explored that high intelligence can be a real social disadvantage. More thoughtful and revealing reflections like that, and less sniggering, would be welcome.”
Christopher Stevens, Daily Mail