Rockfield: The Studio on the Farm; The Luminaries; The Young Offenders 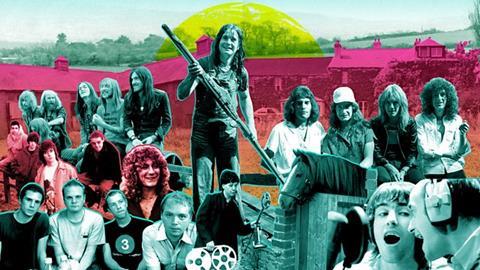 Rockfield: The Studio on the Farm, BBC2 Wales & BBC4

“Apparently it took director Hannah Berryman five years to make Rockfield: The Studio on the Farm. It was worth it. This tale of a Welsh dairy farm that became an unlikely haven for rock stars was an absolute joy from start to finish. Favourite anecdote? Let’s go with Ozzy Osbourne, recalling his arrival in Monmouthshire: “We’d never been on a farm. Everything was new. Seeing a cow in a field! We were from the streets of Aston, the only thing we ever saw was a police horse.””
Anita Singh, Telegraph

“Kingsley Ward and his brother Charles set up the studios in their barns after an audition with George Martin, the Beatles producer, failed to ignite their own pop career. This 90-minute history skirted round tensions between the brothers, and didn’t manage to land a chat with Brian May or Roger Taylor of Queen. But it made for a pleasantly eccentric parade of rock trivia.”
Christopher Stevens, Daily Mail

“As with all music documentaries though, the best parts were the stories. “We used to wake up and the cleaners would have left our drugs lined up for us,” is one of Burgess’s. Other musical folk tales from the farm included Iggy Pop falling off the wagon and inviting his friend David Bowie to record with him, who turned up in a red suit, holding a block of cheese and a Heineken and Noel Gallagher recording “Wonderwall” while sat atop an actual wall and spending evenings wielding a baseball bat at his brother who had been at the pub all afternoon. Musical history seeps out of the walls at Rockfield. This joyous, funny, exciting documentary captured its infectious, inspiring nature perfectly.”
Emily Baker, The i

“Hello? Is anybody there, or was it just me and the cat watching the final episode of The Luminaries? A finale that turned out to be an enigma wrapped in a soggy blanket inside a gloomy mess. I don’t blame you if you bailed out weeks ago to do something simpler, such as nailing jelly to a moving wall.”
Carol Midgley, The Times

““What’s happening?” cried Himesh Patel, as Emery Staines, in the penultimate episode of The Luminaries. If only we knew, pal. At least you’ve read the script. Perhaps, I thought, it would all become clear in the final episode. Sadly not.”
Anita Singh, Telegraph

“For all its slapstick, though, it is oddly touching. When Jock loses the baby, which he inevitably does, a whole army of shoppers comes to his rescue. “So I’m not a shit parent?” he asks, in a ball on the floor, as a woman reassures him that everyone has done it. This leads to an “I’m Spartacus” moment in the homeware department of a shop in Cork, which is surprisingly moving and tender. Yes, it is about two unapologetic criminals giving a copper the eternal runaround, but it has plenty of heart.”
Rebecca Nicholson, The Guardian