Rolling In It; Everything: The Real Thing Story; The Australian Dream; Inside Legoland

“A fun concept, though I could have been watching pretty much any Saturday evening gameshow” 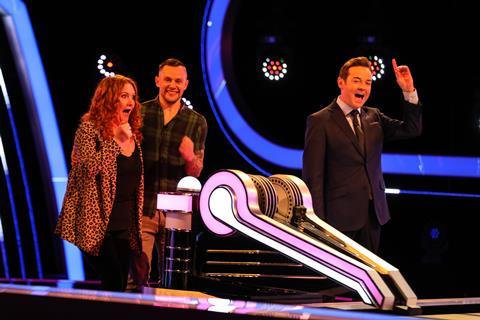 Rolling In It, ITV

“It was all a bit laborious, slowed down further by 15 multiple-choice quiz questions. These were mostly about pop, telly and celebs, though that didn’t help the player who had to guess which TV comedy featured ‘Mrs Slocombe’s pussy’. She’d never heard of Are You Being Served? — ‘I’m young,’ she wailed — so she plumped for Keeping Up Appearances. I shudder to think what Hyacinth Bucket, the glorious snob from that sitcom, would have made of such a vulgar question. But then, ‘Mrs Bouquet’ would never have admitted to watching ITV.”
Christopher Stevens, Daily Mail

“Why bother coming up with new gameshow concepts when there are already so many brilliant ideas languishing in forgotten seaside arcades? ITV’s popular daytime series, Tipping Point, borrows from those infuriating coin pusher machines, while the channel’s latest Saturday night entertainment, Rolling In It, is effectively a supersized version of “Roll a Win”. It is a fun concept, though I could have been watching pretty much any Saturday evening gameshow. The tropes were all there: dramatic lighting, nail-biting decisions about passing or going on to the next round, and an audience “oohing” and “aahing”.”
Emily Baker, The i

“The only failing of Simon Sheridan’s fond documentary is in explaining what went wrong when Jeff Wayne asked Chris Amoo to sing Forever Autumn and Thunder Child for his musical version of HG Wells’s novel. Why were Justin Hayward’s vocals rather than Amoo’s used on the hit album? Why, if the latter’s versions were so good, didn’t we hear them in this film?”
Stuart Jeffries, The Guardian

“There were some interesting moments – The Real Thing performed as David Essex’s backing singers, a factor the Rock On singer self-importantly says gave them their mass of young female fans – but this tale was told with too little vigour to make it stand out from the other musical stories that emerged at from the time. This was a shame because The Real Thing were nothing like the other bands. They were the first all-black British band to have a UK number one. This film shined when contributors – from the band themselves to fans including Billy Ocean and Trevor Nelson – were given space to acknowledge the difficulties that came with being black in 70s Britain.”
Emily Baker, The i

“An excellent and skewering analysis of racism. Ugly, gurning, moronic, spittle-flecked racism and the way it almost broke a sporting legend, Adam Goodes, whose crime was to stand up against the prejudice he suffered for being an indigenous citizen. What helped to make Daniel Gordon and Stan Grant’s film so eloquent was that much of the bigotry was right there for us to witness, recorded on TV, social media and radio, and was woven artfully with commentary from other athletes who offered their own stories of racial abuse.”
Carol Midgley, The Times

Inside Legoland: A World Of Wonder, Channel 5

“Working at the theme park is already stressful enough, to judge from this lighthearted series. Visitors rush the turnstiles at opening time, determined to squeeze every minute of fun from the price of their ticket, but once inside many of them seem to spend the day queuing at the customer services desk to have a rant. One choice gripe was that there weren’t enough staff to handle all the complaints. Now, how would anyone know that, if they hadn’t joined the queue to have a moan in the first place? The most popular complaint was that people were getting too wet on the water ride, Pirate Falls. If you’ve ever been on a water ride, you’ll appreciate that half the fun is getting soaked.”
Christopher Stevens, Daily Mail