“Drag Race UK reminds us how different, funny and interesting people can be” 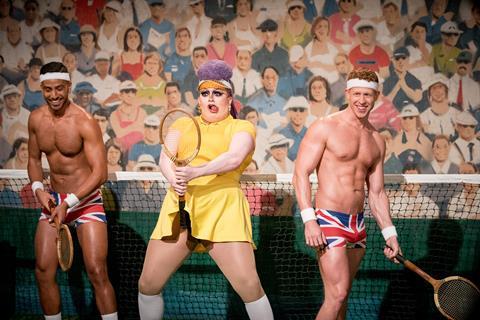 “RuPaul’s Drag Race UK is back for a second season, and I continue to cackle for the full hour at its winningly filthy self-deprecation. This series is enhanced by having 12 queens, rather than 10, though much of the tone and tempo remains the same. It’s a riotous watch. The US version, which is running almost concurrently, is perfectly entertaining, an elegant pro, but to be down in the gutter is, as someone memorably said, much betta.”
Rebecca Nicholson, The Guardian

“The first season of Drag Race UK was a rough diamond – perfect for its blemishes, not despite them. This season, it has clearly been polished up, but the producers have left just enough imperfections to celebrate the subversive, irreverent charm of Britain’s best drag.”
Michael Chakraverty, The i

“The second series of the BBC’s take on RuPaul’s Drag Race is a reminder of why its first series worked so well. The format might not be revolutionary, but what makes the show so special, beyond the stunning costumes, razor-sharp one-liners and filthy innuendos, is the contestants. Drag Race UK reminds us how different, funny and interesting people can be.”
Louis Staples, The Independent

“It was all good fun, although at the risk of sounding like Disgusted of Tunbridge Wells, I’d had enough of the ‘balls’ innuendo in the Wimbledon photoshoot challenge long before the 15th mention. And I could have done without the judges’ comments, delivered by RuPaul, Elizabeth Hurley and co as if they were reading Christmas cracker jokes to a humourless aunt.”
Anita Singh, The Telegraph

“Green is engaging, drawing us into his life story. The Partridge-isms came thick and fast though. But Green is likeable and it did seem that he was in on the joke. The history sprinkled throughout was informative. But more than anything, you could tell this was a subject close to Green’s heart. His enthusiasm was infectious.”
Anita Singh, The Telegraph

“Robson Green: Walking Coast to Coast could easily fall into the ideas folder marked ‘Monkey tennis’ and ‘Millennium barn dance with Jet from Gladiators at Yeovil aerodrome’. You can see why Channel 5 commissioned it, though: cheeky Northumbrian lad, likes fishing and the outdoors, walks the length of Hadrian’s Wall. The problem was the disjointed nature of yet another telly travelogue that promised much, but was all over the place. Green could have been walking down the A408 to Uxbridge for all he was capable of evoking historical magic.”
Ben Dowell, The Times

“Robson has a knack for chatting to anyone, though most of his conversation is about himself. But Robson’s no historian. He couldn’t understand why Hadrian wanted a wall, and thought the Roman emperor must have been a bit of a bighead. Imagine! As if any egomaniac would ever become obsessed with building a wall.”
Christopher Stevens, Daily Mail

“Each episode is a pitch-perfect – from script, to delivery, to lighting, to cinematography, to aspect ratio – but loving parody of classic sitcoms. It’s all deliciously, confidently, stylishly done. The parodies are fantastic fun, the jokes are great, the performances (especially from Olsen and Bettany, whose chemistry is a joy in itself) are wonderful, and it has the glorious air of something shaped by people who know exactly what they’re doing, where they want to go and how they’re going to get there.”
Lucy Mangan, The Guardian

“The Disney+ original series sounds like a wretched Saturday Night Live sketch. But with a clear affection for its corny inspirations, WandaVision manages to avoid the easy punchline. In aesthetic, structure and tone, WandaVision is a welcome aberration for a franchise whose fatal flaw has long been its stifling adherence to formula. It’s the most purely intriguing thing the MCU has ever made.”
Louis Chilton, The Independent

“Disney+’s latest foray into blockbuster TV is an eccentric, if often delightful, take on the Spandex crimefighter formula. As a loving pastiche of creaky American sitcoms WandaVision is endearing. And Olsen and Bettany are clearly having a hoot in their retro frocks and dad sweaters.”
Ed Power, The Telegraph