“After a barren year for Broadway and the West End, this good-hearted show is a welcome musical reprise” 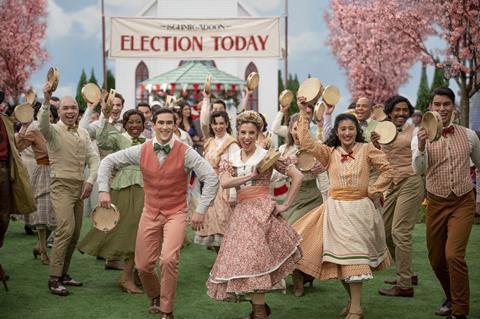 “Schmigadoon! toes the line between parody and tribute expertly. It’s self-aware and deliberate enough to be funny, but still holds enough reverence for its inspirations to retain their inherent charm and lightness. The songs – and the performance of them – are spectacular as any original stage musical, and are bolstered by impeccable, candy floss set design and costumes. It’s an exuberant, escapist slice of heaven.”
Emily Baker, The i

“The series has the feel of an extended sketch. It certainly doesn’t match the great musicals for dramaturgical sophistication or specificity, nor will it convert those who’d rather cut off their own ears than listen to a dreamy Lerner and Loewe ballad. But, after a barren year for Broadway and the West End, this good-hearted show is a welcome musical reprise.”
Marianka Swain, The Telegraph

“The homages come thick and fast, even for a relative musicals novice such as myself. And yet … it never quite adds up to the sum of its parts – let alone more. What seems like a strength at first, of having every song and dance as a full production number, quickly becomes wearing after the initial impressiveness wears off. None has the comic spin to sustain it. Schmigadoon! passes the time harmlessly enough but overall, it is a one-note show and even that is too often flat.”
Lucy Mangan, The Guardian

“It is about loneliness and self-discovery as much as it is about tennis, and it is beautifully done. The series has a slow, almost meditative pace, and it imbues seemingly mundane events with poignancy. This is not a bombastic sports documentary, nor is it as straightforward as previous ones following Serena Williams or Andy Murray, for example. It is more artistic and interior, and well worth watching in its entirety. It is cleverly assembled, and gorgeously filmed, with a magnetic score by Devonté Hynes and Theodosia Roussos.”
Rebecca Nicholson, The Guardian

“In this absorbing and unflinching character study, Osaka comes across as pensive, thoughtful and self-aware to a potentially unhelpful degree. Even if your knowledge of the sport begins and ends with handed-down memories of John McEnroe yelling at an umpire, the portrait drawn of Osaka is engrossing. Garrett Bradley’s calm and sensation-free film makes for an absorbing appetite-whetter ahead of Osaka’s return to centre court at the Olympics.”
Ed Power, The Telegraph

Our NHS: A Hidden History, BBC2

“For anyone who argues that the NHS could function without immigrant workers, Our NHS: A Hidden History was a most elegant retort.”
Carol Midgley, The Times

“This one-off documentary did not shy away from the racism faced by some of the arrivals. But what shone through was their shared commitment to making the NHS a success.”
Christopher Stevens, Daily Mail