“It could be summarised in six words: great puppets, shame about the script” 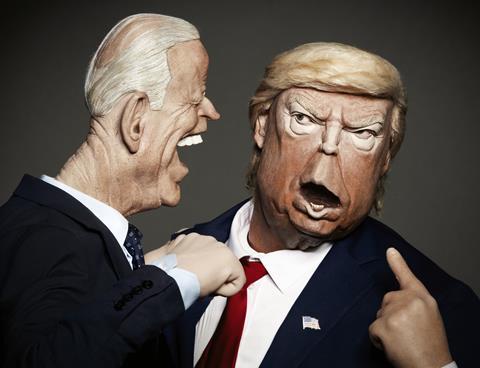 “It could be summarised in six words: great puppets, shame about the script. The dialogue and the gags (although the latter word flatters) veered from weak to woeful. Maybe I am remembering the old Spitting Image I relished through rose-tinted spectacles; the original certainly had its hits and misses. But this was all so mild, barely ruffling a solitary government feather I imagine.”
Carol Midgley, The Times

“The thing about Spitting Image is that it has always been visually splendid but verbally frustrating. In other words the puppets are great but the jokes are weak. On the evidence of the new series so far, and the latest brace of Election Specials, it’s running true to its old form.”
Sean O’Grady, The Independent

“Spitting Image features grotesque rubber parodies of Donald Trump, Boris Johnson, Dominic Cummings etc but little in the way of living, breathing jokes. It’s latex all the way down, with scarcely a punchline-with-a-pulse to be discerned. To be fair to its 21st century incarnation, it faces the additional challenge of lampooning figures essentially beyond parody – with Trump the obvious example. Even with that caveat, this is a toothless effort.”
Ed Power, The Telegraph

“It’s pitifully obvious this version is British humour meant for a U.S. audience, which just doesn’t work. Still, the sketches featuring Trump were probably the funniest. Less successful are the skits with Dominic Cummings, who ought to be a gift to satirists. His head throbs, and he drones like an alien from the Planet Megabore, but every gag is visible so far in advance that we might as well have written notice of the punchlines.”
Christopher Stevens, Daily Mail

“Jezza Neumann and the team behind last year’s equally harrowing Britain’s Breadline Kids brought a similar empathy and unflinching eye to these lives, filmed over four months. Trump’s Breadline Kids hit all the harder for the absence of editorialising but, with one in six American children growing up below the poverty line, the sense of something fundamentally, systemically wrong should have been apparent to anyone.”
Gabriel Tate, The Telegraph

“American Nightmare: Trump’s Breadline Kids could not be timelier. On it goes, illustrating deftly in an hour the innumerable life chances already absent from these children’s lives before more were stolen by the pandemic, by the president, by the lack of a sufficient safety net for people who fall.”
Lucy Mangan, The Guardian

“It was as sad as you would expect, children relying on food banks and handouts for almost every meal, worrying like people older than their years, falling behind on their schooling in lockdown. Yet it was striking that the promise of the American dream still flickered within these children.”
Carol Midgley, The Times

“In letting the children speak, the film was almost unbearably sad, but also full of the straight-talking, innocent insight of which only children are capable. The documentary, which showed how being poor in the US can be a hell like no other, and if you’re black and poor, even more so – was perfectly timed.”
Kasia Delgado, The i