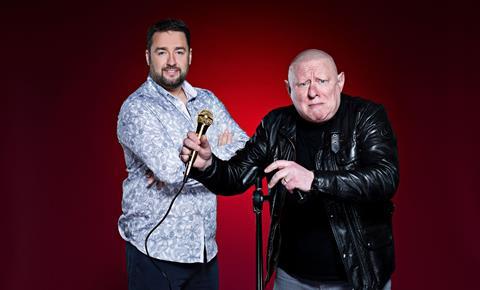 “Stand Up & Deliver was a hoot. Nick Helm and Baroness Sayeeda Warsi made a delightful double act, with the outsider comedian Helm realising that the contradictions within Warsi – working class, child of immigrants, northern, only non-white face in the Cabinet – made her a kindred spirit. I’d happily watch another few episodes of Helm and Warsi’s odd-couple adventures.”
Chris Bennion, The Telegraph

“The casting is magnificent: the Rev Richard Coles, the reality mainstay Curtis Pritchard, the former Corrie star Katie McGlynn, the Conservative peer Sayeeda Warsi and, best of all, the Happy Mondays’ Shaun Ryder. By the end of this first part, I was so invested in their ‘journeys’ that I forgot there was a competitive element. At this stage, anyone could win. But hearing Ryder tell that story about tomatoes means we are all winners.”
Rebecca Nicholson, The Guardian

“Being a stand-up comedian is one of the bravest things you can do. To do it on TV when you aren’t even a trained comedian is bed-wetting stuff. Our five celebrities quickly showed why. The Rev Richard Coles was the best of them. Dear old Shaun Ryder is funny, but has attention deficit hyperactivity disorder so couldn’t marshal his thoughts into a coherent shaggy dog story. It’s so much harder than it looks.”
Carol Midgley, The Times

“The comic with the toughest job is Judi Love, who is tutoring Love Island’s Curtis Pritchard. Curtis suffers from the worst trait a comedian can have — laughing at his own jokes. More terrible still, he does it before he tells them. Judi has low expectations. She’ll count it a success if Curtis can make the crowd giggle once in five minutes. I think she’s setting her sights too high.”
Christopher Stevens, Daily Mail

“This eventful hour featured as much real-life drama as an entire series of Trisha’s confessional TV shows. Goddard’s tumultuous story took in parentage secrets, racism, suicide bids, breast cancer and three failed marriages. She artfully dodged a few questions – notably the identity of her new partner – but with a life this eventful, it didn’t much matter. Quizmaster Morgan might not have induced the tears he so desperately craved but in a strong series, this was still the standout interview so far.”
Michael Hogan, The Telegraph

“There were laughs to be had, and the pairing of Daisy May Cooper and Susan Wokoma worked a treat, but too many of the celebs, Joel Dommett included, used it as a platform to try out their bluer material, which became grating. The bigger problem, however, is the concept: those on the dates are there to be laughed at, by the comedians, by us, therefore they have to be risible – buffoons, braggarts and Barbie dolls.”
Chris Bennion, The Times