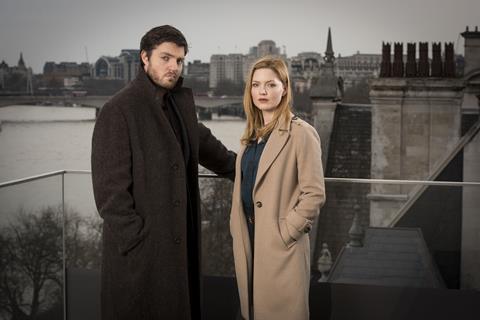 “What looks on paper like recycled cliché — fleabitten private detective with dysfunctional life; clever female sidekick; beautiful young woman suffering a violent death (quelle surprise) — somehow managed to be different: old-fashioned and fresh simultaneously. Neither did it use female death as titillation, which makes a nice change.”
Carol Midgley, The Times

“The story of a supermodel whose supposed suicide could have been murder was slow to get going but, really, that was almost incidental. The meat here was in the characters. Tom Burke was instantly magnetic, his shaggy moon-like features and shambling figure easily convincing us that a broke, underemployed P I with attitude really could keep a two-room office in the hyper-expensive heart of Central London. All in all, it made for a very promising start.”
Gerard O’Donovan, The Telegraph

“Nothing daringly original, but Burke captures Strike’s rough-edged, world-weary charm. Holliday Grainger is an excellent foil as his shrewd and capable Girl Friday. And it was a welcome change to see a crime drama that didn’t feature grisly forensic scenes, a mismatched cop duo and a rural community entirely inhabited by appalling people.”
Jeff Robson, The i

“Strike plays on our paranoia, in unexpected ways. Good storytelling isn’t just about surprising the audience. It’s not even about misleading them. It’s about making them mislead themselves.”
Matt Baylis, Daily Express

Margaret Atwood – You Have Been Warned!, BBC1

“There was little that a viewer keen enough on Atwood to settle down in front of an hour-long documentary about her wouldn’t have already known. Still, there were great moments, such as when she explained that she never intended or claimed to be a feminist writer.”
Lucy Mangan, The Guardian

“She proved to be a rather good company in last night’s Imagine encounter with Alan Yentob in a snowbound Toronto, a throaty, rumbling chuckle accompanying her quietly pithy remarks. Yes, Atwood’s answers were often curt, but she has a sense of proportion and humour that you suspect might be missing in some of her more avid readers.”
Gerard Gilbert, The i

In Solitary: The Anti-Social Experiment, Channel 5

“Channel 5’s In Solitary: The Anti-Social Experiment was both more fascinating than any programme about four people locked in four featureless portable buildings for five days and less histrionic than any stunt-based documentary by Channel 5 had any right to be. It didn’t dig deep, but it stayed sober and didn’t obscure the process or the conclusions with extraneous nonsense.”
Lucy Mangan, The Guardian

“This was billed as a unique psychological investigation, but it was just voyeuristic cruelty on camera, a cheapo version of torture shows such as The Island and I’m A Celeb. The only aim was to see which contestants cracked up. It was nasty, and pointless.”
Christopher Stevens, Daily Mail

“Everyone knows what happens to people when you lock them up in solitary confinement. If, by any chance, you didn’t or you just enjoy watching people disintegrate in front of you, then this programme would have been right up your alley.”
Matt Baylis, Daily Express