“The programme is a standard gentle travelogue format done well” 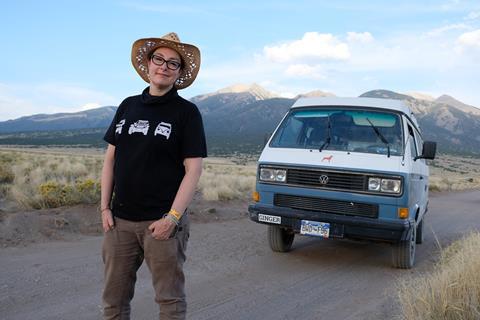 “The programme is a standard gentle travelogue format done well. A presenter who manages to be irreverent without being disrespectful, who can engage at the right level with any interviewee and ad-lib jokes whenever things might otherwise flag, is always a joy.”
Lucy Mangan, The Guardian

“This was a fresh take on an exhausted trope: the celebrity travelogue. Perkins genuinely seemed to be roughing it in a smallish van. Inspired by the film Nomadland and the trend for people to eschew overpriced bricks and mortar and ‘stuff’ for living simply on four wheels, it was an eye-opener.”
Carol Midgley, The Times

“If you saw Nomadland, you will have learned a great deal about the lives of older Americans reduced to these circumstances, doing tough seasonal work in Amazon warehouses or tourist resorts. Perkins barely scratched the surface of this, instead waxing lyrical about life on the open road. This wasn’t a deep exploration, more of a tourist trip.”
Anita Singh, The Telegraph

“The show desperately needed a presenter who cared about Americana. With someone at the wheel to rhapsodise about Hollywood Westerns and relive the romance of the pioneers, we might have been transported. Instead, we got an hour of sarky remarks about plastic plates and the lack of toilets.”
Christopher Stevens, Daily Mail

“Glossy hashtags aside, many of these people spend years or even decades on the road and Perkins’ gimmicky stopovers – here she attempted both burlesque and belly dancing – felt too fleeting to really get to grips with any of the deeper reasons why. There is much to unpack about the financial, societal and political motivations for living like this: I hope next week’s Colorado instalment might skip the forced fun shed some proper light.”
Rachel Sigee, The i

“Wasn’t this wondrous television? It’s the BBC at its best, although half the experience is Attenborough’s soothing, chocolatey narration, the last voice you’d want to hear if you were being led into some Orwellian, population-controlling pod for compulsory euthanasia. The creativity and patience of the camera team and the editors will surely be rewarded with gongs come the next Baftas or whatever.”
Caorl Midgley, The Times