“As telly two-handers so often are, it is extremely stagey and seems probable to vary in quality depending on who the weekly guest star is” 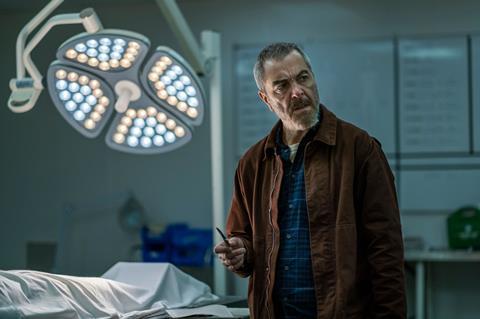 “Clearly Suspect is aiming for a certain mood, a sort of Luther-lite. It is noirish, all neon lighting in darkened corners, with locations named the Crimson Orchid (a strip club), Baz’s Sauna and Gym (a boxing club) and, er, County Racecourse. But it is a strained version of noir that doesn’t land, and often ends up cartoonish.”
Lucy Mangan, The Guardian

“Admirably trying to do something different from the glut of other Scandi-noir (and Scandi-noir-inspired) crime thrillers that have flooded screens over the past decade, as the series progresses the show consists almost entirely of two-handers between James Nesbitt and a starry line-up of guest actors. As telly two-handers so often are, it is extremely stagey and seems probable to vary in quality depending on who the weekly guest star is. Perhaps it would work better as a tight two-hour play.”
Rachel Sigee, The i

“I do like the structure — basically two-hander plays in 30-minute segments with James Nesbitt the constant — even if sometimes a scene change was desperately needed. Maybe it would work better on stage. The cast is quality, but my problem is that Danny is unlikeable. We are asked to care about his daughter and her difficult relationship with her father, but we don’t know anything about her.”
Carol Midgley, The Times

“Nesbitt was excellent; he always is. But what was remarkable about Suspect was the stripped-back, bare format. It had an almost theatrical feel, with each episode played mostly as a set-piece scene between Nesbitt and one other actor.”
Roland White, Daily Mail

“What an odd little drama it is. It is adapted from a Danish series and directed by a Belgian, and instead of feeling like a British show (because, surely, that is what Channel 4 is here to provide) it feels distinctly European. In the opener, Nesbitt and Joely Richardson deliver their lines as if they’re getting to grips with a foreign language.”
Anita Singh, The Telegraph

“Nesbitt is reliably Nesbitty – the camera frequently lingering on his face for several blank seconds where he could be acting, or could be thinking about whether he locked his car – but the writing and plotting are so trite that the series almost has the timbre of parody. The dialogue ranges from the hackneyed to just plain weird, via the deeply terrible. It all has the feel of a not-terribly-competent first draft of a script written by someone who has acquired Nesbitt’s phone number and has 48 hours to cobble together a project for him.”
Nick Hilton, The Independent

“McDonald & Dodds came over all Death in Paradise meets Inspector Morse, with its cerebral weaving of linguistics into a needlessly complicated murder story. It was entertaining nonetheless. I prefer this series when it doesn’t try too hard plot-wise and gives more space to the dynamic between Dodds (Jason Watkins) and McDonald (Tala Gouveia) because this is its real engine. They work well as an odd couple.”
Carol Midgley, The Times

“Belvedere, last night’s episode, was basically Inspector Morse with jokes. There was the picturesque city setting: Bath in this case, rather than Morse’s Oxford. There was a suspicious professor, played by Alan Davies, to provide a highbrow veneer. There was even a vintage car, a shiny Triumph Stag driven by suspect Sian Phillips, playing the professor’s rather feisty 99-year-old mother.”
Roland White, Daily Mail