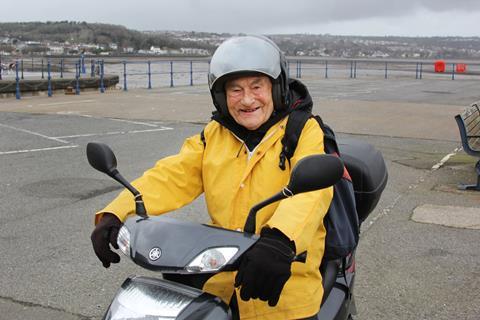 “Whether it’s the unintentional humour of a stubborn nonagenarian, the live-life-to-the-fullest attitude of some of the participants, or the non sequitur answers given by drivers whose hearing is on the way out, it’ll surely raise a smile. Adorable and sad in equal measure, ‘100 Year Old Driving School’ is perfect reality entertainment.”
Alex Nelson, The i

“Wouldn’t it be good if there were a documentary about our elders that didn’t include music once heard in Carry On at Your Convenience? Was the oompah music there to encourage us to laugh? That’s riding a rather thin line between cheerful and patronising, like John’s car wandering the centre line in the road.”
James Jackson, The Times

“I like John in The 100 Year Old Driving School. John, 102, drives on the wrong side of the road in order to see what’s coming. Now hurry along. No, not you John, but Google, Apple, all the motor manufacturers, everyone working on driverless cars.”
Sam Wollaston, The Guardian

“A traveller’s guide to a place no one has yet travelled to was always going to be a hit and miss affair. Last night’s programme kept irritating us with the daft pretence of addressing itself to some future astronaut.”
Matt Baylis, Daily Express

“The programme is handily divided into sections: getting there, what to do and see etc. With experts. Spacecraft structures engineer Abbie Hutty explains the journey. Not entirely surprisingly it isn’t easy, rocket science. The landing especially, with temperatures of 1750C generated as you enter Mars’s atmosphere. Don’t forget your heat shield.”
Sam Wollaston, The Guardian

“Noel Fielding is starting to settle into the role, if not exactly turning up in a Cossack chocolate finger-biscuit outfit just yet, and the innuendos are being dialled up a bit too. It’s all so relaxed, good-natured and, yes, British as to feel bulletproof, such that even the sight of Sandi Toksvig moonwalking seems just fine.”
James Jackson, The Times

“At no point did anyone behave like a rational human being – which detracted not one ounce from the fun. Doctor Foster is hands down autumn’s silliest drama. But – and this may not be a coincidence – it is also the most wildly addictive.”
Ed Power, The Telegraph