The A Word; Rob and Romesh vs Ballet 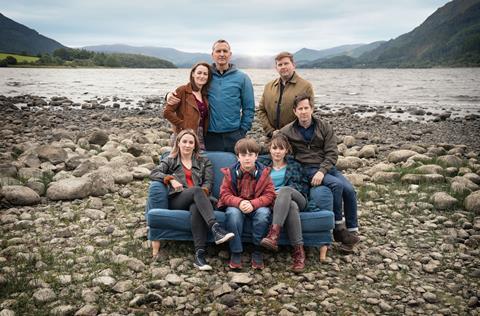 “It is clear, though, just how far this fractured family have come since Joe’s initial diagnosis. They are doing really well, but that doesn’t mean it is not still hard. The A Word always did hit us directly in the feels and its theme of anxious parents struggling to reassure anxious kids is doubly resonant for audiences under lockdown.”
Ellen E Jones, The Guardian

“The A Word isn’t the sexiest series. Its characters aren’t glossy-haired and chiselled. They don’t have exciting jobs, exotic tastes or mysterious back stories involving crime or espionage. Their kitchens aren’t enviably vast. Instead it’s a deeply human drama about an ordinary family’s problems. Not flashy or fashionable, perhaps, but full of heart and warm humour.”
Michael Hogan, The Telegraph

“Peter Bowker’s drama has earned the right to a third series. It may have the feel of a BBC family melodrama next to the glamorous box sets on Netflix, but, three years since it was last on, it’s also still quietly radical in its own way, deadpan funny and as heartfelt as anything around.”
James Jackson, The Times

“Bowker’s writing was as skilful as ever, deftly knitting plot and character together. So skilful, in fact, that you almost can’t see the join when The A Word, rather too frequently, slides into soap.”
Adam Sweeting, The i

“Max Vento, the ten-year-old at the centre of The A Word has been delivering a performance that manages to be both convincingly accurate and profoundly moving. To convey autism on screen without over-reaching into parody is almost impossible. But Max gets it right because he never shows off. Unlike most of the other characters in Peter Bowker’s absorbing family drama, he isn’t seeking attention. There’s much more to the drama: Joe’s big sister, his uncle and grandfather all have their own stories. But it is Max’s performance that transforms this from the ordinary.”
Christopher Stevens, Daily Mail

Rob and Romesh vs Ballet, Sky1

“Beckett and Ranganathan spent half the programme wobbling about in their underwear. An outsider’s go at ballet feels like a quintessentially English kind of wheeze, although this was less the In at the Deep End school of English self-deprecation and more the sweary-pub-geezers-’avin’-a-laugh end. So, we had lots of coarse gags about the Birmingham Royal Ballet dancers’ manhoods and “arses” — a collision of high culture and lads-bantz comedy — which was irksome. But it would seem perverse to start getting sniffy with such a game display of self-ridicule.”
James Jackson, The Times

“You had to admire their bravery as they squeezed into training costumes, which revealed a pair of bodies from the Pavarotti school of athleticism. Worse was to come when they were forced to jump, screaming, into a muscle-soothing ice bath. But you have to remember that all this masochistic torment is a win-win for our two anti-heroes – we get to laugh, and Rob and Romesh get a big boost for their burgeoning showbusiness careers.”
Adam Sweeting, The i