“Too sluggish for a first episode, not working for viewer attention and slightly self-indulgent with pace.” 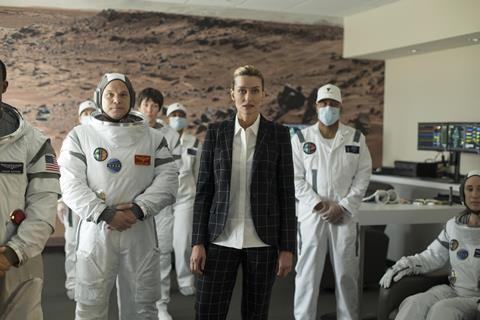 “I wonder if the dearth of space action will have left some feeling celestially frustrated (sorry). Because apart from when the rocket took off, then swiftly exploded, killing the five astronauts inside, the narrative was all on the ground. This was too sluggish for a first episode, not working for viewer attention and being slightly self-indulgent with pace.”
Carol, Midgley, The Times

“No one could call it fast-moving: this is the sort of TV where the hero spends five minutes fixing a leak under his sink and the heroine walks aimlessly round her flat, staring at her reflection in the plate-glass windows, while a sad piano plays. But any space-race story that starts with a big bang like that obviously has some interesting plans, and this one is written by Beau Willimon, the man behind House Of Cards — a good omen.”
Christopher Stevens, Daily Mail

“Almost nothing happens in the first episode of The First. What does the rest of the series have in store for Tom (Sean Penn)? An agglomeration of slickly executed, gloriously uninvolving scenes he will continue to phone in, or a gradual evolution into an ensemble character piece that uses all the talent involved, who presumably didn’t sign up to remain ciphers throughout?”
Lucy Mangan, The Guardian

“Even slow character drama needs a dramatic destination and, at the end of this first instalment, we’re still in the dark as to what the point of The First is, if it isn’t going to be a grand space opera. It’s got a tank full of thespian power, but where’s it headed?”
Jack Seale, The i

“Some people (and I was one) wondered whether Julia Davis’s Sally4Ever would run out of steam after last week’s excruciating but darkly splendid opener. How do you follow that? The answer was with more filth. And a different flavour of viewer agony.”
Carol, Midgley, The Times