“It is witty and farcical, a rollicking ride through history that embraces absurdity.” 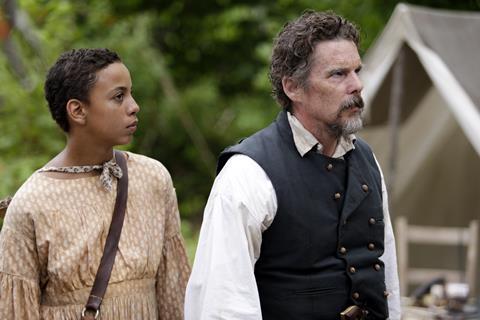 “It is witty and farcical, a rollicking ride through history that embraces absurdity. It is unapologetically wordy, and the language is brilliant and vibrant, with an ear for theatrical sparring. The Good Lord Bird feels like complicated, adult television that assumes its audience will view it with intelligence. It asks questions that it doesn’t always wish to answer, and it has a surprising amount of fun doing so.”
Rebecca Nicholson, The Guardian

“This new Showtime series boldly embraces a streak of irreverence in the way you would more expect of Django Unchained, the Coen brothers’ True Grit or even, in certain moments, Huckleberry Finn as directed by Monty Python. The American Civil War has been done to death, but this reimagines a lesser-known juncture that led to it with no shortage of verve.”
James Jackson, The Times

“The show is as far from a dry history lesson as you can imagine. It is a delirious Western which leavens the deathly serious subject matter of slavery with almost Python-esque humour. What could have been a dour series is full of life, and addresses John Brown’s white saviour complex with humour.”
Anita Singh, The Telegraph

“The pacing of the first episode was inconsistent. Conversations were unnecessarily drawn-out, punctuated by bursts of action with little warning or building of tension. More an introduction to Brown and Onion’s world than plot-driven, it was nevertheless engrossingly atmospheric and ended on an intriguing cliffhanger. A sign of good things to come.”
Emily Baker, The i

“Sarah Beeny’s New Life in the Country is a series that manages to be both dull and annoying. Listening to a privileged couple moan about their local council for an hour is not the escapist TV we’re looking for.”
Anita Singh, The Telegraph

“Because this is BBC2, occasional tips on dog training are thrown in. But the pets aren’t really the point: what’s fascinating about this six-part series is the behaviour of the besotted humans.”
Christopher Stevens, Daily Mail

“The pleasure of his local travelogue is his refusal to be impressed by much. And unlike most comedians exploring the British landscape for telly, he doesn’t want to drum up the tourist trade.”
Christopher Stevens, Daily Mail