The Great British Bake Off; The Fires That Foretold Grenfell; Imagine; The Reluctant Landlord

“As friends and family gathered for the traditional end-of-series garden party, another triumphant contest built to a rousing crescendo.” 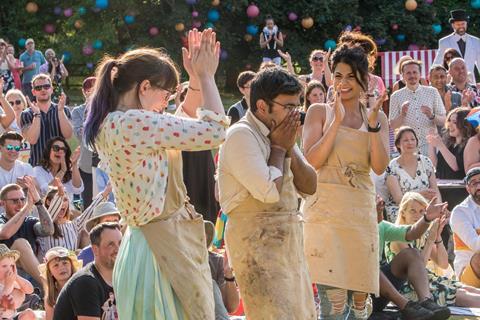 “It was easy to forget this was only the second series on the show’s new home of Channel 4. Replacement stars Toksvig, Fielding and Leith felt like old friends, radiating as much warmth as Mary, Mel and Sue back in the BBC days. As friends and family gathered for the traditional end-of-series garden party, another triumphant contest built to a rousing crescendo.”
Michael Hogan, The Telegraph

“This has been a somewhat low-key series of Bake Off, despite Paul Hollywood’s strenuous efforts to make his Handshakes a thing. As always, the final cakes were underwhelming. And by underwhelming I mean some of the ugliest cakes I’ve ever seen. Who knew a cake could be dystopian?”
Alice Jones, The i

“The most joyful thing about this series was that as we entered the final, the average viewer would have been equally content whichever of the three remaining competitors won. [In the end] Rahul is handed the trophy. And you realise that a world in which he wasn’t would have felt very dooming indeed.”
Lucy Mangan, The Guardian

The Fires That Foretold Grenfell, BBC2

“The Fires That Foretold Grenfell looked back at five fires across 45 years, the lessons of which could have, and should have, prevented Grenfell happening. Filmed and directed by Jamie Roberts, it amounted to a shocking litany of measures not taken.”
Tim Dowling, The Guardian

“As each ensuing high-rise fire was, in turn, recalled, the film gathered a cumulative power, derived from anger as much as distress. Hindsight is a blunt tool with which to judge, but how glaring did these lessons need to be?”
James Jackson, The Times

“Imagine: Becoming Cary Grant was unusual for framing its subject’s life from an entirely psychological perspective. The journey that followed, through his unhappy childhood and illustrious yet oddly unfulfilling career, made for a long, melancholic film, a ‘window into his inner world’ that was quietly superb throughout.”
James Jackson, The Times

“Most of the footage was borrowed from his best-known films. Despite the fine readings by Jonathan Pryce from Grant’s unpublished autobiography, the effect of these movie extracts was to make me wish I was watching the whole films. Nothing in Grant’s sad, drug-addled ramblings could compare to his brilliance on screen.”
Christopher Stevens, Daily Mail

“Rangesh Ranganathan dominated the first episode, which often felt like little more than a vehicle for his reactionary kids-these-days humour. Overall, the show is funny enough, in a slightly miserable way. But would it be worth ditching a night at the pub to stay in and watch it?”
Helen Chandler-Wilde, The Telegraph