The Great British Bake Off; We Are Who We Are

“A nation needed televisual comfort from its favourite sweet-toothed treat and it duly delivered.” 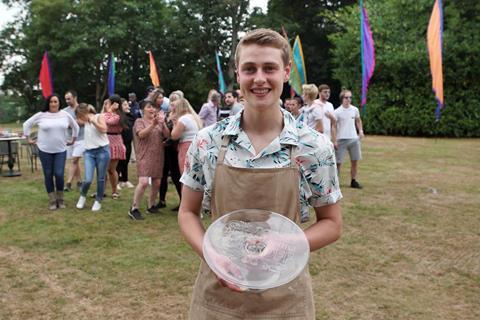 “This wasn’t a demonstration of wall-to-wall technical wizardry by any means. Instead, what we got this year was a presentation of well-meaning but flawed humanity. And that’s what we’ve all been crying out for. Unless I have become entirely addled by lockdown, the sight of Noel Fielding talking Laura out of a defeated post-challenge fug by whispering a heartfelt Björn Borg analogy might genuinely be one of the most uplifting television moments of the year.”
Stuart Heritage, The Guardian

“Peter’s pleasing win put the cherry on top of a successful series. Ratings have been buoyant. New co-host Matt Lucas has proved inspired casting, combining wit and kindness with a clear love of cake. Most of all, viewers were thankful that Bake Off 2020 happened at all. A nation needed televisual comfort from its favourite sweet-toothed treat and it duly delivered.”
Michael Hogan, The Telegraph

“I felt I learnt a lot of things that I will never use, like the best way to stabilise custard and what a Fraisier cake is. Yet although the judges and the presenters, Noel Fielding and Matt Lucas, are as comforting as a big pile of warm friends, something is missing. There is virtually no smut like in the Mel and Sue era.”
Sean O’Grady, The Independent

“This finale capped off a series that we desperately needed. It has cemented Bake Off as an institution that has stood the test of time – 10 years to be exact. In this year, of all years, it has been our other Eden. A demi-paradise, a fortress built against infection.”
Henry Bird, The i

“If beautifully shot, languorously paced character and mood pieces are your thing, you are going to be very happy with eight hours of this, especially if it maintains the opening episode’s ability to avoid ever tipping into smugness at just how much beauty and talent it has managed to assemble and play with. For others, unless that languorous pace picks up just a little and the characters become just a little more active, and the mood is driven by something more tangible than the sun-saturated landscape, We Are Who We Are may feel too inert to be worth keeping faith with.”
Lucy Mangan, The Guardian

“Guadagnino is a master of slow, meditative coming-of-age stories and We Are Who We Are allows him to stretch his novelistic form out across eight hours. I found it beautifully rendered, its sense of unfamiliar, imprisoned place was startling, all long lazy landscapes and crickets, and only ever hinting at what will inevitably come to divide the children. Though there was little action, the intrigue of its lonely teenagers was absorbing, the conflicts about who they want to be that will wage within them for the rest of their lives only just beginning to chafe.”
Sarah Carson, The i

“This is the Call Me By Your Name director’s first TV series, and the format suits him. He is a master of this sort of lush snapshot of messy youth – and with just shy of 10 hours to play with, he can go at his own languorous pace. There are no easy answers in We Are Who We Are. Important lines are spoken over or thrown away. Heroes are also villains, and no one ends up neatly defined or labelled. The more you watch, the more that shrug of a title starts to make sense.”
Alexandra Pollard, The Independent

“Eye-opening and provocative film-making is Luca Guadagnino’s stock-in-trade and We Are Who We Are ticked those boxes. Right away we were in complicated, unsettling territory. But (whisper it) not that interested.”
Shane Watson, Daily Mail

“Television allows director Luca Guadagnino even longer to luxuriate in his interests of sunshine and sexuality. This is another series suggesting that young people have become far more casual and open-minded about sex. If Normal People reminded older viewers of their own first love, We Are Who We Are might remind them of their own sexual awakening.”
James Jackson, The Times