The Great British Sewing Bee; Our Queen at War; The Beastie Boys Story

“A lovely thing to watch, because everyone involved is nice. The contestants are nice, every last one of them” 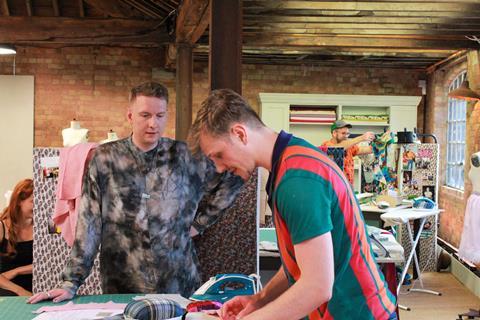 “Thank you, commissioning lords, for sending us in our time of need series six of The Great British Sewing Bee. None of the participants is cast in order to raise any hackles or provide grit in the oyster. Everything is designed to shine a little light, to show you what can be done by ordinary people with a special set of skills.”
Lucy Mangan, The Guardian

“Lycett’s light-touch campery — a bit like Julian Clary crossed with Larry Grayson — plugs any holes in the momentum and lifts any lulls in proceedings (and there are quite a few lulls when 12 people are simply staring at a man’s boring work shirt). His innuendos and asides are the wholesome content required right now.”
Carol Midgley, The Times

“It lacks the drama of Bake Off, because how wrong can you go? What is the sewing equivalent of a melted baked Alaska chucked in the bin? And it lacks the indulgence of Bake Off, because not many of us find a wrap skirt as desirable as a chocolate mini-roll. But it is a lovely thing to watch, because everyone involved is nice. The contestants are nice, every last one of them.”
Anita Singh, The Telegraph

“With Joe in charge, the Sewing Bee has taken on a mischievous air. Now that it has moved from BBC2, it’s no longer simply about setting challenges for seamstresses and picking the best. There are extra points on offer to reward fun and silliness, which makes the show even more perfect for these times.”
Christopher Stevens, Daily Mail

Our Queen at War, ITV

“This did not feel as if it had been thrown together in haste, despite having an inevitable cut-and-paste element to it. It was well timed, reminding us how this country has overcome worse than a virus.”
Carol Midgley, The Times

“This was one of those programmes that ITV does regularly – strong on archive footage, weaker when it comes to the historians popping up to give us what purports to be expert knowledge of the Royal family. The script sometimes sounded as if it had been written for children: ‘With their famous houses and palaces, the Royal family were vulnerable targets for Nazi assassins.’ But perhaps that is no bad thing. It would make an excellent home school history lesson.”
Anita Singh, The Telegraph

“The basic (in every sense of the word) argument put forward was that Princess Elizabeth’s experiences during the Second World War shaped her leadership style as our monarch. While this is no doubt true, it is also so crushingly obvious that it is hard to understand why this hour-long film needed to be made.”
Rupert Hawksley, The i

“It was intended to celebrate the contribution made to that victory by the young Princess Elizabeth. The historical evidence was thin — a few clips from newsreels, a sheaf of black-and-white photos that had apparently been coloured with children’s crayons, and some newspaper headlines … all tied together with narration by Phyllis Logan. But with the current perspective, it became just as much about the way ordinary British people coped with sudden, extraordinary upheaval.”
Christopher Stevens, Daily Mail

“Over the course of two hours or so in this film – part concert footage, part testimonial – they gag and goof through their band’s 30-year history. Behind them flicker an array of archive clips and behind-the-scenes photos. Spike Jonze directed both the show and this film, and it has the polish of a slick “Beastie Boys 101” presentation. They address their failures: the sexist lyrics; the treatment of original band member Kate Schellenbach, who was kicked out of the band just as they were becoming famous; and their flop album Paul’s Boutique.”
Joseph Walsh, The i