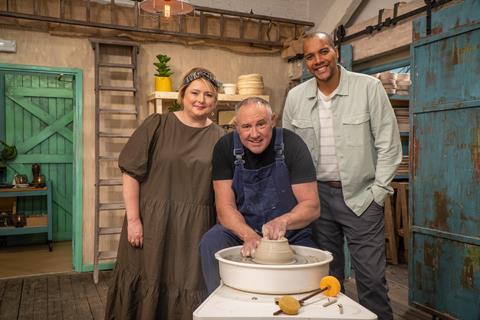 The Great Pottery Throw Down, Channel 4

“It’s nice to have this show back. The unintentional smut in this beautifully therapeutic hour leaves Bake Off in the shade. The judge Keith Brymer Jones wept over the cheese sets and the port chalices, while throwing the crap ones in a bucket. The contestants also wept. It’s a wonder their clay ever dried out.”
Carol Midgley, The Times

“It is a precious hour of tranquillity, this vision of talented people giving their best, taking the job seriously but without being ridiculously overinvested or intense. Creating something fit for purpose out of nothing, moulding order out of chaos – how can this not, even in ordinary years, let alone one as stricken as this, be beautiful?”
Lucy Mangan, The Guardian

“Maybe on another day I might have enjoyed The Great Pottery Throw Down. It’s charming and gentle and has a fabulous new presenter in Siobhán McSweeney, best known as Sister Michael in Derry Girls. But I am so weary of this format. I wish this show all the best, because it’s wholesome and pleasant and because McSweeney provides just the right mix of warmth and dry wit. But I’d rather watch paint dry.”
Anita Singh, The Telegraph

“McSweeney fast proved herself more than up for the presenting gig, exuding the perfect blend of warmth and wit along with the requisite command of Bake Off-inspired innuendo. However, it was less clear as to whether the show was worthy of McSweeney. Throw Down tends towards the eye-rollingly saccharine. Despite McSweeney’s charms and the undeniably soothing property of watching people work with clay, I’m not sure I will be back next week.”
Gwendolyn Smith, The i

“Re-watching the skits here was fun, but the documentary was more than just a jolly hour; Atkinson takes his comedy seriously, and the programme treated its audience with intelligence as it dissected what made Mr Bean great.”
Anita Singh, The Telegraph

“Here was the blood, sweat and tears of a clown. And as Tony Robinson said, correctly, Mr Bean is the greatest clown of our lifetime. Comedy, as every comedian knows, is a serious business. Watching all those clips you could see that it is as much about Atkinson’s bloodhound eyes as his elastic face, as well as, of course, his body.”
Carol Midgley, The Times

“Partly because of how rare it is, it’s always interesting to hear Atkinson talk about his work, even in such a tame format, padded with lots of familiar clips, not least when Mr Bean ends up flapping around his bedsit with his head jammed up a turkey.”
Sean O’Grady, The Independent

“So many sequences from this series are superb: it may be the most technically stunning Attenborough show yet. The microscopic camera work, zooming in on fig wasps two millimetres long and picking out the hairs on the backs of Saharan silver ants, was especially remarkable.”
Christopher Stevens, Daily Mail

“It’s swilling with foul language, F-words and C-words in every exchange, so that all these supposed aristocrats sound alike. This is meant to be a comedy about status and snobbery. But differences dissolve when everyone, male or female, swears like a squaddie in barracks.”
Christopher Stevens, Daily Mail