The Handmaid’s Tale; Time; A Pandemic Poem: Where Did the World Go? 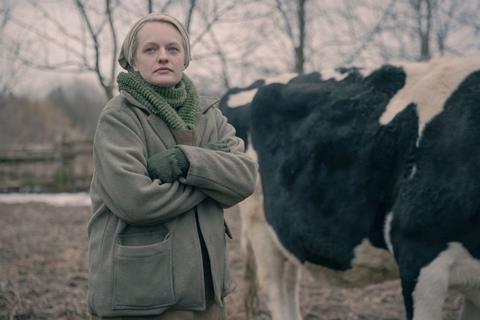 “This remains a big, bold, brassy show. It is shot like a music video, and filled with expensive, classic songs, by Carole King and Aretha Franklin, set to horribly gruesome scenes. It never felt like style over substance, exactly, but for a while, it was hard to love a drama that yielded only misery and pain. Thankfully, June’s adventures in rebel land have reignited the spark, and given viewers something, and someone, to root for. After all that suffering, though, the tension now lies in working out what kind of heroine we have been left with.”
Rebecca Nicholson,The Guardian

“What keeps the show watchable is the psychological drama – June’s shifting morality, every character finding their own point on the spectrum between self-preservation and working for the common good. Occasionally it pulls off a neat trick, as when Commander Lawrence (Bradley Whitford) believed he was walking into a torture chamber, only for the ominous-looking chair to be there for the purpose of giving him a wet shave. But this is a show that has fallen into the trap, like Homeland and others, of outstaying its welcome. It should be put out of its very considerable misery.”
Anita Singh, The Telegraph

“Moss and Grace are exceptional in their adopted mother-daughter roles but the violent climax of the episode was hard to stomach. Watching June dispense her own brutal justice in this way left me wondering whether her humanity has all but been snuffed out.We already know that life for women in Gilead is abhorrent, and it feels like the more interesting story now lies outside the bounds of this hellhole. In Canada, the Waterfords (Ralph Fiennes and Yvonne Strahovski) are facing trial and the rescue of the children seems likely to provoke war. But the heart of the show will always be June, and the writers should be praised for her complexities: as the almost mythological hero of her own revolution, her messy morality is going to take us – and her – to dark places this season. The question is, just how dark?”
Rachael Sigee, The i

“However, while you can never exactly say you “enjoy” an episode, this one was good. Partly because we got a stellar scene from everyone’s favourite stoner of women, Aunt Lydia. What a fabulous presence Ann Dowd is, quivering with blistering contempt for the male court yet feigning humility while beaten and gaunt after 19 days of torture interrogation by the Eyes (the secret police of the regime). In 150 seconds she almost stole the hour.”
Carol Midgley, The Times

“There was a better class of misery to be found on BBC1 in the finale of Jimmy McGovern’s prison drama Time. It saved the best episode for last. That funeral segment alone was worth five stars. Sean Bean’s character, Mark, behind bars for causing death by drink-driving, was not allowed to attend his father’s funeral, but was talked through it step by step and with compassion by the prison chaplain (Siobhan Finneran), speeches and all. Beautifully handled, beautifully acted. It has been meaningful misery, a study of guilt, regret, forgiveness and redemption, but never lapsing into mawkish sentimentality.”
Carol Midgley, The Times

“Something about this narrative, and the fact that Mark was rescued by the decent but conveniently hard-as-nails inmate who he had been teaching to read, made the denouement of the series feel a little too neat. The rawness of the earlier episodes was missing. But it was still a masterclass in acting from all involved, right down to the supporting players (a special mention for Sue Johnston as Mark’s mother).”
Anita Singh, The Telegraph

A Pandemic Poem: Where Did the World Go? BBC 2

“Some of the sequences combining poetry and dance are graceful and work well; others, like ballerinas in a suburban street, are just eccentric. Usually Armitage has an acute Victoria Wood-like eye for the absurdities of lockdown: “How many ways can you bake a banana cake?”, or “The hour of the home haircut draws ever nearer, my son / No rest ’til you’ve varnished with antibacterial gel.” Other times, though, it doesn’t rise to the occasion, and it’s more William McGonagall than Wilfred Owen. There’s one especially bad passage, where they rope Sophie Raworth in to read it out in the BBC newsroom, over the images of a raid on a club.”
Sean O’Grady, The Independent