The Jubilee Pudding: 70 Years in the Baking; The Essex Serpent 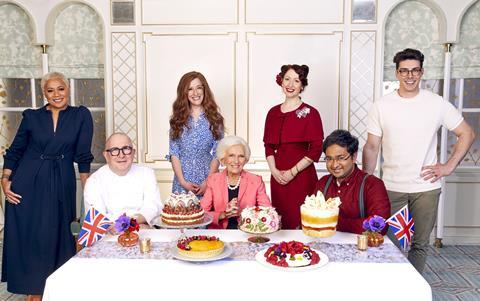 The Jubilee Pudding: 70 Years in the Baking, BBC1

“The Jubilee Pudding: 70 Years in the Baking was not about royals but about ordinary people with a huge talent for making desserts. The five finalists, whittled down from 5,000 entries, were all exceptionally good, their Victoria sponges, their tarts, their falooda cakes all artworks. How come they’ve never been in Bake Off? They’d walk it.”
Carol Midgley, The Times

“As the quintet baked up a storm, viewers were treated to a light, fluffy blend of cookery and pop history. With everything draped in bunting and flags, it was a pleasingly proud, unapologetically patriotic hour. The BBC might have lost the Bake Off to Channel 4 but this wholesome one-off was some calorific consolation. Good bake.”
Michael Hogan, The Telegraph

“Dame Mary Berry and Monica Galetti headed the panel on The Jubilee Pudding: 70 Years In The Baking, after the 5,000 had been whittled down to five. They had a practically impossible task. Every entry, from Jemma’s seven-layered jelly trifle to Shabnam’s sponge soaked in saffron and rose syrup, looked mouth-watering. But I’m not sure how easy any of these recipes will be to copy at home.”
Christopher Stevens, Daily Mail

”As you might expect from something that combined baking and the Queen, The Jubilee Pudding leaned into the British tendency towards twee – Union Jacks, little cake forks, the word ‘scrumptious’ were out in full force. The main issue, however, is that it was extremely boring. By the time Camilla, Duchess of Cornwall was wheeled in for an audience with the bakers, and to announce the winner, the whole affair started to feel a bit painstaking. Though the contestants were clearly talented, and the champion delighted, as a full package, The Jubilee Pudding was less an indulgent dessert and more a flat pancake.”
Lauren O’Neill, The i

“Anna Symon’s take works perfectly well as a drama that delivers suitably sinuous twists and, under Clio Barnard’s direction, looks grimly fabulous, emerging out of the marsh mists that seem to promise that any malevolence is possible. And Clare Danes grounds and gives a remarkable truth to the whole. But even allowing for the fact that screen adaptations rarely capture the full filigree of a literary novelist’s work, it feels like slightly too much has been lost in translation here.”
Lucy Mangan, The Guardian

“At least the drama lights up whenever Hiddleston appears on screen. Because it’s otherwise desperately dreary, which is unforgivable when the source material is so rich (disclaimer: I loved the book). Director Clio Barnard (The Selfish Giant) has always been stronger on atmosphere than plot. She and writer, Anna Symon, have produced something flat, in which moments of high drama or strong emotion seem overdone. Still, it looks beautiful, thanks to David Raedeker’s cinematography. And Hiddleston’s wardrobe.”
Anita Singh, The Telegraph

“It’s unsurprising that the novel would eventually be made into a TV series. What is unexpected, however, is that it wasn’t the period drama-loving BBC or the purveyors of thrillers ITV who would eventually make it, but Apple TV+, the booming streaming service keen to take risks and with a massive budget to spend. It’s these factors that make The Essex Serpent so good, avoiding what could have been a throwaway adaptation and instead producing a tense, brooding, solid drama.”
Emily Baker, The i

“The real star of the show is the murky estuary, where the fog rolls in and the treacherous waters are cloaked in bad omens and superstition. It’s a shame, therefore, that against this beautiful backdrop, the human drama never crackles. Directed by Clio Barnard, the show seems to forget that, along with all the portentous symbolism, there needs to be a spark of wit or a flicker of emotional depth.”
Nick Hilton, The Independent