The Outlaws; Top Gear; Party at the Palace 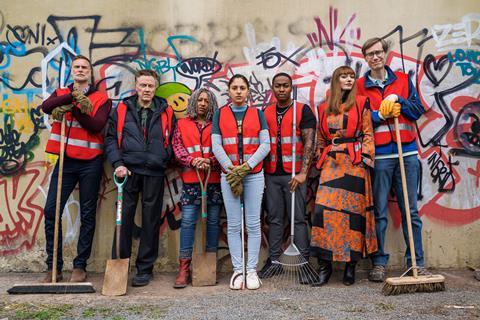 “The good news is that the second series came firing on all cylinders and teeming with quality awkwardness and filth. The writing somehow felt sharper and more confident in episode one, which might well be my imagination as both series were filmed back-to-back, but anyway, I very much enjoyed it.”
Carol Midgley, The Times

“Co-created and largely written by Stephen Merchant, it continues a trend for widescreen comedy thrillers that started in 2013 with The Wrong Mans. The Outlaws, blessed with the writing nous and Hollywood clout that an A-lister like Merchant brings, is the first in a while to get the right blend of small-time pratfalls and twisting, propulsive, cinematic narrative.”
Jack Seale, The Guardian

“In another high-energy plate-spinning plot, directed with verve by Merchant and Alicia MacDonald, it’s the beautifully drawn characters who give it heart. You even care for sad sack John (Darren Boyd) when he delivers a pitiful aria about white privilege. As for the script, Merchant and co-writer Elgin James keep it richly stocked with fizzing gags.”
Jasper Rees, The Telegraph

“The comedy in The Outlaws is too broad, the action too brutal, the sentiment too soupy and the dialogue too scatalogical. The only bright spot is Eleanor Tomlinson, giving it everything as Lady Gabby, the rich-girl influencer who has nothing real in her life except her cocaine problem.”
Christopher Stevens, Daily Mail

“It wasn’t a bad opening to the new series if racing Seventies Chevies is your thing. Not being a petrolhead I tend to find the non-racing bits, when they are just talking among themselves, the most entertaining and so it proved here. Yes, much of it is clearly scripted, but Flintoff, Harris and McGuinness seem genuinely to get on and find each other funny. When they repeatedly slapped each other’s faces in a childish game of snap it felt spontaneous, a tiny bit fetishistic and I did actually laugh.”
Carol Midgley, The Times

“A tug-of-war with monster trucks and a dive into the Everglades for swamp buggy trials kept the hour full and busy. The trio have been slow to gel but the BBC has given them time and their japes no longer feel forced.”
Christopher Stevens, Daily Mail

“This is Top Gear’s 32nd series and after a few speed bumps following the departure of Clarkson et al, it seems to have settled into a comfortable lane that maintains the men-will-be-boys energy but without the sheen of nastiness that overshadowed the old days. The whole of this first episode was given over to the American road trip as McGuinness, Flintoff and Harris tried an unlikely range of local motorsports. Delving into the weird niches of these subcultures is exactly what Top Gear should be doing to shift itself out of well-worn, old-fashioned petrolhead smugness.”
Rachel Sigee, The i

“I won’t claim to be a lapsed devotee but long after the departure of what Fleetwood Mac scholars might term the classic line-up, there now seems to be a charisma void at the heart of the brand. Alas there’s no way of enhancing what used to be a magazine show about cars – by including women, say, or taking a responsible attitude to global warming – without fatally hybridising whatever it is that secures its mystifying popularity.”
Jasper Rees, The Telegraph

Party at the Palace, BBC1

“All credit to BBC Studios for pulling off an evening that felt somewhere between Sunday night at Glastonbury and the Last Night of the Proms. The 360-degree stage allowed seamless transitions between the musical acts, which was something of a mercy for us television viewers, given the occasionally excruciating 30 minutes that we were treated to before Brian May and his guitar got the admirable, if scattergun, pop concert underway. The concert was event TV, pulled off with some style and only a few irritations.”
Chris Bennion, The Telegraph

“It was fun, sweet, silly, vibrant, deferential, deeply earnest, and sometimes – in tributes to Prince Philip, in particular, really quite moving – but the Queen has not missed the party of a lifetime.”
Sarah Carson, The i

“As the show begins with a touching skit of the queen taking tea with Paddington Bear, we might expect a fairly safe, comfy, nonagenarian-friendly sort of evening. But what we, and an increasingly dumbstruck stand full of royals, get is one of the most bizarre and unrelenting barrages of random entertainment ever staged. The effect is like curling in a ball on the floor while being brutally beaten by 70 years of culture all at once.”
Mark Beaumont, The Independent