“The format, while well-worn, is still throwing up some surprises” 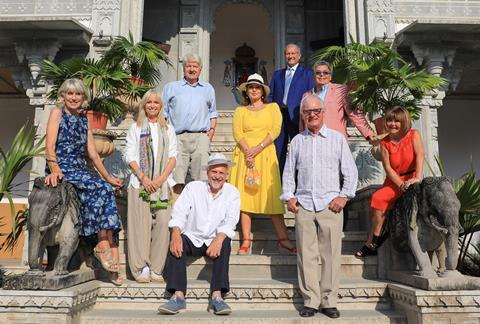 “Based on this opener, the rest of the series is unlikely to yield furious arguments or sizzling trysts. But there’s no need to check out just yet.”
Tom Ough, The Telegraph

“It wasn’t without charm, especially since meditation allowed the wallflower [Syd] Little to bloom and [Stephanie ] Beacham to lower her acidic defences, but three more episodes of this very familiar fare could be a long haul. By the end I was fan-dabi-dozing.”
Gabriel Tate, The Times

“There’s a broad mixture of classes as nine TV personalities are thrown together, from the aeriated Dynasty actress Stephanie Beacham to the old-fashioned Lancashire comic Syd Little. But they all seem likeable: previous parties have included a few prickly characters who could ruin your holiday just by staying in the same resort.”
Christopher Stevens, Daily Mail

“Call it Senior Former Celebrities Go On Holiday With Your Licence Fee and have done with it.”
Matt Baylis, Daily Express

“The format, while well-worn, is still throwing up some surprises.”
Emily Jupp, The i

“Murder in Soho was too flabby to pack the anticipated punch throughout. Yet as an evocation of a Soho when the word “gentrification” was as dirty as the district’s regular clientele, it was as imposing as its subject.”
Gabriel Tate, The Times

“The gentle treatment paid off, when a former underworld associate of Mills admitted that his father had organised the hit. Though there’s more to be discovered, this shone a valuable light on some murky history.”
Christopher Stevens, Daily Mail

“Here we are, in a world in which peacekeepers can be predators, care systems effectively funnel girls to grooming gangs, and call logs and police reports from immigrant child shelters in the US show men already moving in on the newest-minted mass of vulnerable children – and needing no magic to do harm.”
Lucy Mangan, The Guardian