The Responder; The Nilsen Files

“As fast and riveting as a thriller and as harrowing as a documentary. If you are looking for a state-of-the-nation piece, it is here” 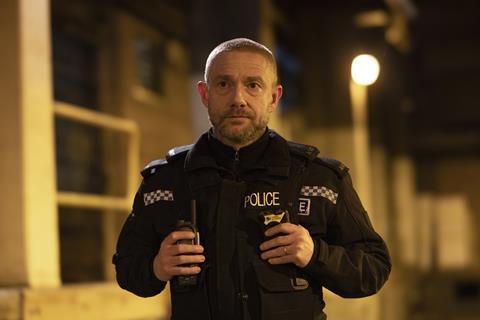 “The script is an astoundingly tough, vigorous, sinewy thing without a wasted word or moment. Martin Freeman – who must have fallen on it like a hungry dog – does every bit of it justice. Carson is a man comprising layers of rage, suffering and despair, and Freeman slowly illuminates each one; he will surely win awards for his performance. The Responder is as fast and riveting as a thriller and as harrowing as a documentary. If you are looking for a state-of-the-nation piece, it is here.”
Lucy Mangan, The i

“The Responder, which looked ‘meh’ on paper (‘grizzled police officer in northern city has troubled life’ — yawn), turned out to be electrifying. And that includes Martin Freeman’s surprising Scouse accent, which, trust me, is very hard to get right. You could tell instantly that this was not written by a ‘TV type’. Tony Schumacher is a former policeman and taxi driver from Liverpool, and he brought what lifelong pen-pushers cannot to the cop genre: jagged authenticity.”
Carol Midgley, The Times

“The Responder feels absolutely authentic, written as it is by Tony Schumacher, a response officer himself until he had a breakdown and quit the force. It’s an accomplished script for a debut writer, with a plot that is never predictable. You may not get along with it, but Schumacher deserves credit for showing us a different side of British policing.”
Anita Singh, The Telegraph

“Every crime writer strives to create pithy dialogue crammed with memorable zingers. Tony Schumacher does it brilliantly in The Responder, his five-part series starring Martin Freeman as Liverpool copper Chris Carson, who is sliding into a morass of corruption. Freeman is relishing the role, with a Liverpool accent as thick as Scouse stew.”
Christopher Stevens, Daily Mail

“Streaked in neon and drenched in angst, this first episode of five was a showcase for the excellent Freeman. He seemed to simultaneously channel his breakout character, Tim from The Office, and Robert De Niro in Taxi Driver, as he played a jaded copper with a side hustle as taxi man for local drug dealer Carl (Ian Hart). Shot almost entirely after dark and populated with outcasts, losers and broken souls, The Responder could have been 60 minutes of misery. Instead, it was a reminder that Jed Mercurio doesn’t have a monopoly on crime drama that gets under your skin.”
Ed Power, The i

“Documentaries claiming to ‘remember the victims’ are often just thinly veiled excuses to rehash details of a murderer’s crimes. The Nilsen Files was the opposite. Forensic and dogged, it asked the important question: did police homophobia let the serial killer Dennis Nilsen slaughter young men for longer?”
Carol Midgley, The Times

“The crimes of serial killer Dennis Nilsen were so incomprehensibly vile that to dwell on them is to gaze into the face of true evil. But Michael Ogden’s thoughtful new three-part documentary, The Nilsen Files, insists we look and not flinch as it revisits the bespectacled civil servant’s killing of at least 12 young men and boys between 1978 and 1983. The stories of his victims, such as Stephen Sinclair, 20, and Martyn Duffey, 16, are front and centre.”
Ed Power, The i