The Rise of the Murdoch Dynasty; The Plot Against America; I May Destroy You

“The makers have certainly watched Succession” 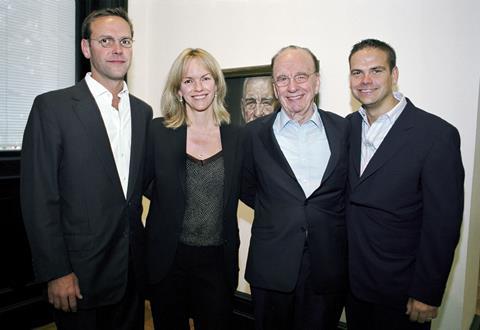 The Rise of the Murdoch Dynasty, BBC2

“The makers of The Rise of the Murdoch Dynasty have certainly watched Succession. The music and opening titles were such a pastiche of Succession’s that the drama’s writers would have recognised them a mile off. And it began in the 1990s, when Murdoch was approaching retirement age and considering which of his children would take over - the succession issue. Once you’ve seen this stuff fictionalised - the rivalries, the backstabbing, the wealth - it adds a frisson. This episode focused on the relationship between Murdoch, his newspapers and Tony Blair, an alliance that saw off John Major’s government in 1997. It was a valuable insight into the way British politics was shaped during that era.”
Anita Singh, The Telegraph

“Director Jamie Roberts and his team had done due diligence in the research department, turning up a trove of nuggets from the archives interspersed with pithy interviews from assorted players in Murdoch’s extraordinary journey. This first episode, subtitled “Kingmaker”, considered the jockeying for power within the Murdoch family, and Rupert’s marriage to Wendi Deng in 1999. The main theme was the way Murdoch built his UK news operation, and used it to leverage political power. It’s absorbing stuff, but while we’ve been told what Murdoch did, we are left still wondering what this all-powerful figure is really like.”
Adam Sweeting, The i

“This was an oddly spineless documentary about the world’s most powerful media family. Every hint of controversy has been excised from Roberts’s three-part programme by lawyers with big scissors. All that’s left is an opening montage splicing Murdoch family video with footage of Rupe greeting prime ministers and presidents, set to a bad-tempered string quartet, recalling the Succession title sequence. Various interviewees said not very much at all. Nigel Farage admitted he had requested clearance from Murdoch even to appear. What did we learn? Not a lot.”
Christopher Stevens, Daily Mail

The Plot Against America, Sky Atlantic

“We may never know what prompted two of the most sociopolitically concerned writers, David Simon and Ed Burns, in modern television history to turn at this precise juncture to adapting Philip Roth’s novel, which imagines an America that has elected a populist celebrity demagogue as president and begins to slide towards fascism. Simon and Burns do their usual exceptional work in delicately fitting pieces of a larger and larger puzzle together to reveal a bigger and more complicated picture at every step. If the beginning seems a bit stagey – for parts of the first hour especially you feel a bit like you’re watching the opening act of an Arthur Miller play, which is absolutely fine if you’re at the theatre watching an Arthur Miller play, but not particularly helpful in drawing you into a television drama – it finds its feet quickly thereafter.”
Lucy Mangan, The Guardian

“It’s a slow-burning start but the sense of foreboding builds. The brilliance of the adaptation is in the way it conveys the creep of fascism. It’s in the ether. The horror will be in how the populist message turns to outright hate. Winona Ryder is the star name here as Evelyn, who is starry-eyed over Lindbergh and his cheerleader, Rabbi Bengelsdorf. As befits her Hollywood star power, Ryder exudes 50 per cent more glamour than anyone else on screen. The dialogue can lean too heavily towards exposition, and there is a staginess about some of the scenes. But as an alternative history lesson, it is frightening and compelling.”
Anita Singh, The Telegraph

“So much TV gets described as a reflection of our tumultuous times, it’s at risk of getting very tedious. Yet if anyone has earned the right to make a drama about a populist race-baiter becoming the president of the US, it’s David Simon, creator of The Wire. To his credit, The Plot Against America manages not to be too thuddingly obvious in its analogies to President Trump. His great talent is in flipping between the big picture and the personal one without you noticing, showing ordinary people being trundled by the wheels of the system. There was an almost Arthur Miller-ish vibe inside the Levin household, often seen through the children’s eyes as the grown-ups bicker and the kids wonder what overheard phrases such as “a fascist bastard” mean.”
James Jackson, The Times

“The series is faithful to Roth’s own New Jersey background, and the show derives much of its plausibility from its meticulous recreation of pre-war Newark: its period clothes and automobiles, Jewish delis and local bakeries. As the radio announces news of Lindbergh’s election victory, Frank Sinatra, pop idol of the day, croons dreamily on the soundtrack. It’s a disturbing evocation of an America that superficially looks the same, but is being horribly transformed. This is a powerful dramatisation of a complex, challenging novel.”
Adam Sweeting, The i

“I May Destroy You reached its finale after 11 dizzying, needle-moving episodes, and given what a rollercoaster through urban millennial sex and drugs it’s been, it was hardly going to end predictably. Whatever your take, it again felt fresh and pitch-dark at once, horrific yet comedic, a contradiction summed up when Arabella manically sang Firestarter at her vile assailant. You have to hand it to Coel: with a kind of self-reflexive irony, she’s just become, like Arabella, the voice of a generation.”
James Jackson, The Times