The Simpler Life; The Great Celebrity Bake Off 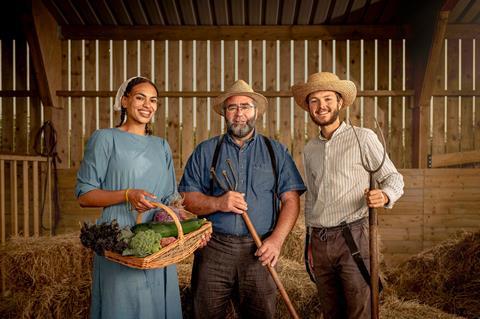 “What can you say? It’s fun to watch. We’ve seen it all before. It tells us nothing new. Nice people, it turns out, gonna nice. Shitebags gonna shitebag. Some life lessons will be professed to have been learned by the end of the six-part series. Maybe Penny will score higher in her agreeableness test at the end, or maybe they’ll kill her and bury her under the kohlrabi. I can’t say I care either way. Can you?”
Lucy Mangan, The Guardian

There was no gas or electricity, which, given current fuel costs, makes the Amish unexpectedly prescient. The community was overseen by a real Amish family from Ohio, the multi-generational Millers, while the programme claimed to be an experiment monitoring the volunteers’ health and well-being while experiencing this supposedly “simpler” life. But of course, we’re also here for the conflict, initially provided by former footballer’s PA Penny, whose love of shopping was restrained by the need to saddle up a horse and cart. She was soon threatening to quit.
Gerard Gilbert, The i

“Prof Barry says the show is unprecedented: ‘Nobody has ever done anything like this before.’ All this proves is that the professor doesn’t watch much Channel 4, because this sort of series has been a staple for more than 20 years, ever since a young Ben Fogle and chums lived as crofters on a Hebridean island.”
Christopher Stevens, Daily Mail

“Considered within its genre — reality TV as social experiment — the early signs are of a thought-provoking series. The problem is, this kind of thing feels a bit old straw hat. Perhaps that’s why I kept wishing I could just watch Witness again instead.”
James Jackson, The Times

The Great Celebrity Bake Off, Channel 4

Judging “slebs” instead of civilians, Prue Leith felt able to remove her kid gloves, bluntly declaring that one of Horne’s creations “tasted disgusting”. It was a somewhat unbalanced cast list, erring on the side of deadpan with Harrison and Horne, while Willis was the resident swot, winning all three rounds. Luckily Amfo added a vital spark; she has so much natural wattage she should be part of the Government’s net zero plans.
Gerard Gilbert, The i