“There are few better people through whom to enjoy a vicarious holiday.” 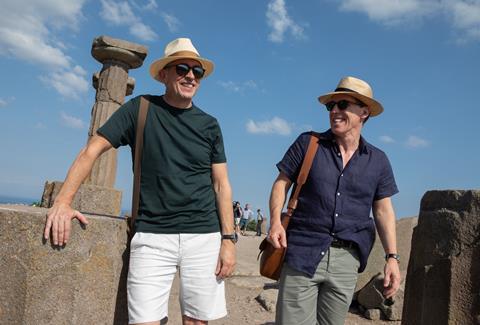 The Trip to Greece, Sky 1

“If it is the last series, then it is bowing out with dignity and sticking to what it knows best, rather than setting fire to its legacy and sending Brydon and Coogan off on an 18-30 all-inclusive at the Ibiza Rocks hotel, though honestly, I would watch that, too. There are few better people through whom to enjoy a vicarious holiday.”
Rebecca Nicholson, The Guardian

“It’s hard to mind them stretching the joke, not when The Trip to Greece is this richly funny. The first 15 or so minutes of episode one were essentially The Trip’s greatest hits as the pair enjoyed a meal in a leafy Turkish enclave. What an unusual show it remains; savour it while it’s still here.”
James Jackson, The Times

“Cynics will tell you that the show is boring and self-indulgent (it’s one, but certainly not the other), merely dinner and impressions; yet for all the semi-improvised waffle over grub, the economy of Winterbottom’s writing is superb. Dinner and impressions? Nonsense. This is the stuff of life.”
Chris Bennion, The Telegraph

“As they worked their way across Greece via a series of fine-dining restaurants, it was fun to speculate how much of their spiky interplay masked genuine antagonism. Several times, Brydon’s inspired improvisations reduced Coogan to authentically helpless giggles.”
Adam Sweeting, The i

“This looked like a frothy youth-TV travelogue but it proved to be an investigative film with teeth.”
Adam Sweeting, The i

“All four presenters were stilted, awkward personalities, who recited their lines like they were reading them off the label on a box of make-up. The links between segments, featuring pretend conversations in the back of a limo, were excruciating. But these young people were not pretending to be polished performers. Slick patter went out with Radio 1 DJs.”
Christopher Stevens, Daily Mail