“So far it is easy, gossipy froth, which is about the best thing you can say about it, and the worst” 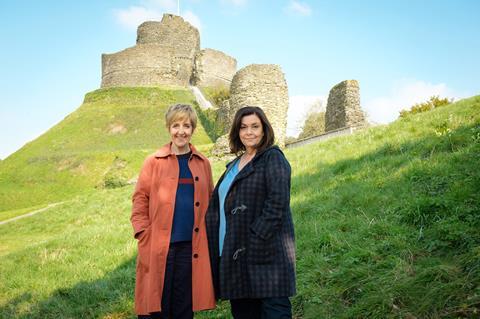 The Trouble with Maggie Cole, ITV

“Who’s to argue with The Trouble with Maggie Cole, a light, fun drama set on the Devon coast to cheer us up as we hunker down to avoid plague. Well, anyone with a Netflix account perhaps, or just anyone with a low tolerance for maddeningly parochial, broadly sketched characters. So far it is easy, gossipy froth, which is about the best thing you can say about it, and the worst.”
James Jackson, The Times

“If the plot is implausible, the characters are wonderfully true to life. We all know someone like Maggie - a good-hearted bossy-boots whose enthusiasm overpowers all objections. It’s all terrific, scurrilous fun, carried along by its own irrepressible sense of mischief.”
Christopher Stevens, Daily Mail

“It feels as if neither the channel nor the writer are quite sure what it should be. Dawn French and Mark Heap are the only ones playing for laughs. But when every other new show is a police procedural, period adaptation or domestic thriller, at least it’s aiming for something different.”
Anita Singh, The Telegraph

“It was pretty awful, wasn’t it? So clingy and desperate for our affections, all bunting and hugger-mugger cottages. Like a clammy hug. I wanted to open all the windows and give the flat a good blow through after watching it. Somebody tell me, please, what you are getting out of this. Because I am at a loss.”
Rupert Hawksley, The i

“Sandylands was surprisingly good fun. Every two minutes, a familiar face would pop up – David Walliams as a B&B owner; Simon Bird as a local bobby – giving the whole thing a pedigree its premise probably doesn’t deserve. The first of three half-hour episodes, screened on consecutive nights, was camp and gaudy with plenty of oo-er humour and OTT performances. But the jokes were not bad at all.”
Rupert Hawksley, The i

“Sandylands ended up being a pinch more entertaining than the dispiriting opening ten minutes of innuendo promised. Somehow the broad humour acquired a sort-of-poignant aspect as Emily wandered amid these small-town eccentrics with a dreamy Cocteau Twins song on the soundtrack.”
James Jackson, The Times

“The documentary was produced like an edge-of-the-seat thriller, with presenter Aldo Kane breaking into closed facilities to gather evidence. It was tense stuff. What he exposed was both grim and heartbreaking.”
Anita Singh, The Telegraph

“Everything he discovered was horrific - but the evidence led him nowhere. Aldo handed it to lobbyists, who presented it at the Convention On International Trade In Endangered Species at Geneva, who ignored it. Nothing was achieved. It was a depressing and ultimately futile exercise.”
Christopher Stevens, Daily Mail

“What an extraordinary band of high-energy, high-talent people the cast are, in a show that must have looked so full of potential on paper, but fails. The musical interludes are the best bits but even these are a mixed bag. When you compare the life, vigour and inventiveness of something like Crazy Ex-Girlfriend, with original lyrics pushing the story forward, it seems like even more of a terrible, enervating waste.”
Lucy Mangan, The Guardian