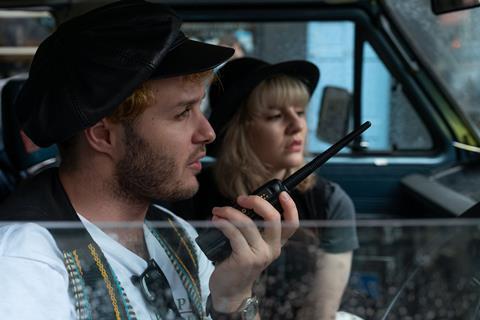 “The programme isn’t obliged to have a wider significance beyond the struggle of the disabled community: attacks on disabled people by an uncaring state are ongoing, and it is notable that the show has cast a much larger number of performers with disabilities than usual. The sex scene where [Arthur] Hughes and [Ruth] Madeley’s bodies are uncovered and beautiful is a further small but pointed statement. But at a time when protest, solidarity and collective action are needed more than ever and under unprecedented threat, the lessons about effective activism feel universal. For as long as Barbara and Alan were spurring each other on, they showed everyone how to get things done.”
Jack Seale, The Guardian

“It’s such a rich story that I found myself wanting more. Madeley and Hughes are more than capable of spearheading an entire series about Barbara and Alan, and I wish the activists’ relationship had been given more room to breathe. While it never felt hurried, the emotional depths – their eventual break-up – could have been much more heart-wrenching and the campaign’s successes even more joyful. But even in the space of an hour and ten minutes, the love story at the show’s centre managed to be groundbreaking. Of all the sex on TV, how many times have you seen two disabled people – one of whom uses a wheelchair – getting it on? Then Barbara Met Alan was an important slice of untold British history, told with riotous determination.”
Emily Baker, The i

“Writers Jack Thorne and Genevieve Barr aimed to recount a piece of untold history — how a fiery young couple attacked the patronising convention that disabled people should be grateful for any charity they could get. Instead, they demanded equal rights.”
Christopher Stevens, Daily Mail

“In the final scene, we met the real-life Barbara getting on a bus with the aid of a disability ramp that we knew was there only because people like her and Alan helped to get the 1995 Disability Discrimination Act passed. Real Barbara also video messaged real Alan, their affection clearly surviving the vagaries of romantic failure, as well as showing how accurate the two lead performances were. She joshed around with the cast, which included the actress Liz Carr, whom we had previously glimpsed in the news footage as herself. Breaking the fourth wall in this way can be a risky business, but here it worked perfectly, taking us into a world that is not often seen by viewers.”
Ben Dowell, The Times

“As much a moving love story and wryly amusing sitcom as it is an emotionally charged chronicle of a small revolution. Madeley as Lisicki is empathetic but with an edge hard enough to know when to tell Holdsworth their relationship is over. Hughes is excellent as the emotionally unstable and tense Holdsworth, and I assume the portrayals are accurate as Lisicki and Holdsworth appear in cameo at the end”
Sean O’Grady, The Independent

BEHIND THE SCENES: Then Barbara Met Alan