There She Goes; Cursed; The Hunt For Cleopatra’s Tomb; Glow Up

“Given that there is nothing “funny” about having a severely disabled child, it is striking how often it manages to be exactly that” 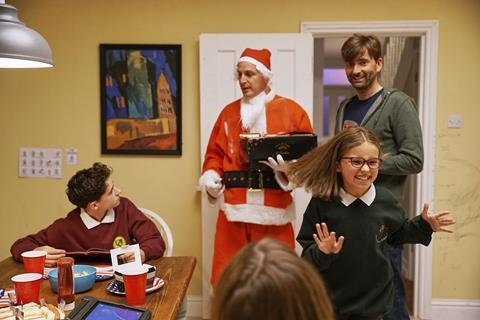 ““Why can’t we be those people again?” Every parent with a couple of young children can sympathise with that sentiment. The man or woman you fell in love with, who you drank and smoked and laughed with, who you stayed out all night with, is now an exhausted, dull, stay-at-home zombie barely capable of full sentences, let alone anything more scintillating. What keeps most couples together is the thought that this phase is temporary. For Emily and Simon, however, with a baby daughter with severe learning difficulties which could require her to have 24-hour care, it feels like a life sentence.”
Chris Bennion, Telegraph

“Given that there is nothing “funny” about having a severely disabled child, it is striking how often There She Goes manages to be exactly that. Last night Nigel Planer provided much of the funny, not as the smitten, smiley grandpa we see in smug TV adverts, but the truculent, downbeat grandpa-in-hell grimacing miserably every time Rosie did a high-pitched squeal, which was all the time.”
Carol Midgley, The Times

“This is the expensively made, atrociously written, chaotic, borderline-barmy tale – adapted from a 2019 book by Tom Wheeler and Frank Miller – of Nimue (13 Reasons Why’s Katherine Langford). She is a child of the fae who will – if the script doesn’t kill her first – grow up to be the Lady of the Lake, the enchantress with cameo-to-main roles throughout the Matter of Britain.”
Lucy Mangan, The Guardian

“It’s an ambitious 10-part reimagining of the Arthurian legend, full of magic, folklore and blood-spattered battles. Is it the next GoT? Sadly not but it’s a perfectly serviceable slice of escapism while we wait for the next contender.”
Michael Hogan, Telegraph

The Hunt For Cleopatra’s Tomb, C5

“Steering away from the usual Valley of the Kings, Dominican archaeologist Kathleen Martinez started digging on the outskirts of Alexandria, on Egypt’s northern coast. To her frustration, Dr M is permitted to excavate at the ruined palace of Taposiris Magna for only eight weeks a year. On her last expedition, she discovered a tomb that had lain unopened for 2,000 years, since the time of Queen Cleopatra, last pharaoh of Ancient Egypt. There was no time to investigate — so the team had to cover it up and pray no one else disturbed the crypt till they could return. The cameras captured Kathleen’s excitement as she finally saw inside the tomb. ‘Oh my gosh,’ she yelled, ‘there are two mummies!’”
Christopher Stevens, Daily Mail

“The contestants are referred to as MUAs (make-up artists), which sounds like “mooers” and, indeed, I expected them to be the same herd you get on every show like this, vowing to “give it my all” and “go all the way”. And they were. One even said, “I’ve got a little fire up my bum,” so presumably she’d had a vindaloo in the catering trailer. Yet it was interesting how many had got into make-up because they were shy, withdrawn or unhappy teenagers. They had forged quite a talent alone in their bedrooms. I was flagging after one hour, though, so I doubt I’m in for another seven.”
Carol Midgley, The Times