This Time with Alan Partridge; Warren 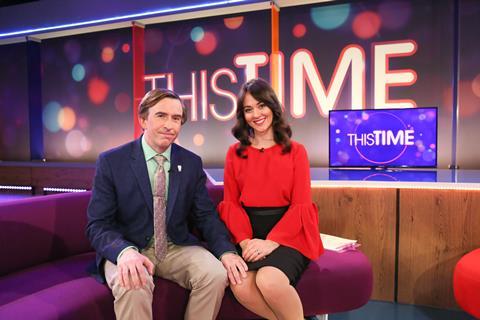 “Steve Coogan and the show’s writers, Neil and Rob Gibbons, have summoned up another perfect reimagining of ‘the Partridge’. Even those who have an aversion to Alan would have admired this spot-on One Show spoof. The evolution of Alan Partridge continues. And it’s magnificent.”
Chris Bennion, The Times

“Just moments into the first episode of This Time, you realised, with joy, that the Gibbon bros and Coogan have once again perfectly captured l’esprit de Partridge. With the exception of that festive special and a handful of episodes of the first series of I’m Alan Partridge, this new effort is as funny as anything he has ever done.”
Mark Monahan, The Telegraph

“Part of the pleasure is simply that it’s so beautifully observed. But as well as the pin-sharp details, there are broad gags begging for belly laughs. I roared as often as I winced. You don’t have to care about life in the media to relish the spectacle of Alan Partridge making another hideous mess of his life.”
Christopher Stevens, Daily Mail

“By the time he went magnificently off-piste, chasing a ‘hacktivist’ into the elevator and demanding that he just ‘finish the interview’ before briefly stopping to tell a passing Emily Maitlis that she ‘brings a welcome touch of class’ to the news, particularly in ‘the current climate’ my laughter was uncontrollable. Welcome back Alan, you’ve been missed.”
Sarah Hughes, The i

“The differentiation of This Time With Alan Partridge’s layers and escalation of every exchange is precision-engineered: beautiful things and a joy forever. This Time brings Alan back, in all his glory and his tragedy, at just the right time.”
Lucy Mangan, The Guardian

“Although it (obviously) wasn’t as awfully inappropriate and old-dated as the character’s own efforts, some of the material was embarrassingly leaden - rather than intentionally. It also suggested that, unlike the sports news, local radio phone-in, or early evening chat show, Steve Coogan had finally found a format he couldn’t parody.”
Jim Shelley, Daily Mail

“Martin Clunes was excellent, a pitch-perfect impression of the eccentric, middle-aged, middle-class suburban English dad. His nuanced comic turn deserved something rather better than Warren, with its overreliance on comedy staples — a shonky clairvoyant and a competitive next-door neighbour. While there was something comforting about its stubbornly old-fashioned nature, there was just too much dust.”
Chris Bennion, The Times

“Warren is at once underwritten and, worse, overwritten. It also has the dismal tic of pointing a large comedy mitt at people and places that we are urged to regard as inherently amusing. All this would have passed muster in the Seventies. But in the era of Fleabag and W1A and the superior motoring comedy Peter Kay’s Car Share, it’s not good enough.”
Jasper Rees, The Telegraph

“This is the sort of comedy that Auntie Beeb makes while holding her nose. There’s no political message, no right-on characters, no urban edge. There are, however, plenty of straightforward laughs. If you still chuckle at repeats of George And Mildred, you’ll enjoy Warren.”
Christopher Stevens, Daily Mail

“It’s rare that I will watch an entire comedy without once cracking a smile, but Warren truly broke me. It’s a shame. Clunes himself turns in a nuanced performance as a small-minded man who considers his most minor thoughts of the utmost importance. He deserves a better vehicle for his talents.”
Sarah Hughes, The i