“Bea and Horgan’s chemistry is as glorious as ever” 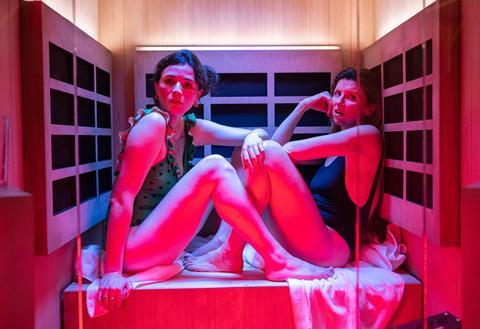 “Bea and Horgan’s chemistry is as glorious as ever. They overlap and underlap perfectly, giving expansive but controlled performances that never take from each other. It is wonderful – indeed it feels almost a privilege – to watch.”
Lucy Mangan, The Guardian

“It’s the sibling relationship at the heart of the series that really makes it sing, and Bea and Horgan’s free-flowing chatter, rapid tonal switches and moments of unflinching honesty provide the stand-out moments in a show that captures the precarious balance of life’s light and shade.”
Rachael Sigee, The i

“Theirs is a rapid-fire dialogue which is part cutting humour, part heartfelt, with an added dash of rude (in the gynaecological, rather than the impolite, sense). Bea’s career in stand-up is evident in the way that she delivers her lines. She and Horgan perfectly capture the sisterly dynamic.”
Anita Singh, The Telegraph

“The two women share such an edgy, sisterly friendship that it’s hard to believe they haven’t grown up together in real life. This Way Up has jokes, but it’s the pain behind the comedy that lingers.”
Christopher Stevens, Daily Mail

“The opening sauna scene went on too long, but it didn’t matter because Aisling Bea and Sharon Horgan are oozing with so much talent that you could watch them doing nothing. At times it felt a bit flat for an opener and was toe-curling when Shona practically begged the food delivery man to have a drink with her. But these are expert hands and the observations sharply pertinent. It’s worth the long haul.”
Carol Midgley, The Times

“Millions of people feel they have a personal investment in The Two Ronnies, so seeing those blissfully happy family recordings, Corbett smothering his baby daughters in kisses, was a poignant reminder of what we have lost, a throwback to what feels a more innocent age. Such tribute shows are always a little gushy, but the love here was huge and authentic.”
Carol Midgley, The Times

“Celebrity contributors in programmes such as these can give the impression that the TV company has corralled whichever mildly famous person happened to be passing the studio at the time. Not here. Everyone featured had a sincere and abiding love of Ronnie Corbett. It was a wonderfully affectionate tribute.”
Anita Singh, The Telegraph

“Corbett’s generosity to other comedians was legendary. But his private life as a family man was less known. This retrospective, coloured with snatches of home movies showing Ronnie playing with his daughters, Emma and Sophie, revealed his charm off-screen. It’s good to know that, much as millions admired him, he was most loved at home.”
Christopher Stevens, Daily Mail

“Bruno Tonioli made for agreeable company as the recently departed Strictly judge saddled up with now former colleague Craig Revel Horwood for Craig and Bruno’s Great British Road Trips. Strictly devotees will have enjoyed watching these choreographic chums swap banter. And even if you couldn’t tell a cha-cha-cha from a zig-a-zig-ah, the boisterous bonhomie went down easily. Their road trip didn’t change the world but it very pleasantly passed the time. And Cornwall looked lovely bathed in spectacular sunshine.”
Ed Power, The Telegraph

“Craig and Bruno’s Great British Road Trips is TV that does exactly what it says on the tin. There was beautiful British scenery, plenty of driving (in a Union flag-clad Mini) and Strictly Come Dancing judges Craig Revel Horwood and Bruno Tonioli giving it peak Craig and Bruno. Everything was as you would expect, from the on-the-nose soundtrack to the carefully scripted banter. If this doesn’t sound like your cup of tea, steer well clear. Otherwise, it was entirely inoffensive.”
Rachel Sigee, The i