“There is much to enjoy in the show, even when it is at its silliest” 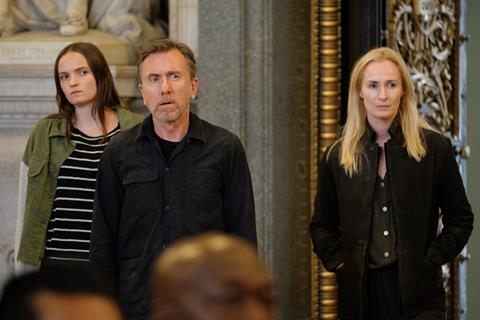 “It might not be everyone’s bag and the plot is utterly preposterous — Jack (Roth), Angela (Genevieve O’Reilly) and Anna (Abigail Lawrie) coolly strolling around Liverpool brazenly killing enemies in between cocktails and karaoke bars. Jack is much better value when he’s drinking (I doubt AA will be quoting me on that) and there is great chemistry between the three main characters, even though they have more lives than the combined incumbents at Battersea Cats’ Home.”
Carol Midgley, The Times

“There is much to enjoy in the show, even when it is at its silliest. It still looks great, whether in the crowded living room of a care home or a brightly painted, multi-coloured staircase, mid-gunfight. The Worth family make a fine trio of assassins, assessing the moral and emotional cost of killing on the beach, when Anna says that taking a life made her feel … “Fabulous?” Jack offers. “Powerful,” suggests Angela. With parents like these, she never had much hope. Their quest for revenge looks as if it will be a thrilling one, even when they are hiding in plain sight, making threats to kill on television, or landing in a bloodied heap in the middle of a ballroom dancefloor.”

“No rationing of BBC resources for Marr, who is so blinded by his own self-importance that he narrated a segment about climate change, pollution and energy waste, while standing on the prow of a multi-million pound Sunseeker yacht. He then saluted Bob Geldof, Tony Benn, Enoch Powell and Earl Mountbatten as titans of the age. There’s a dinner party you’d want to avoid, whatever was on the menu.”
Christopher Stevens, Daily Mail

“It often feels as random in its selections as a contestant lobbing tins in their trolley on Supermarket Sweep. Nobody sane could argue with David Attenborough as an iconic figure of the age, but I wouldn’t have included the cookery writer Elizabeth David (although it did facilitate a trip to Capri, where Marr ate an ice cream) or the joint ticket of Enoch Powell and Tony Benn (anti-EU portents).”
Carol Midgley, The Times

“Spine-tingling jazz, yes. Thrilling tales of gunfights and adventure under vast skies, of course. Big hats. Soap operas dripping with diamonds and greed. The Deep South of America is the natural home of all these. But not cuisine. Heading to the former Confederate states in search of delicious food, as Bake Off’s Nadiya Hussain did in her American Adventure, is like taking a rocket ship to Mars to sample its party atmosphere. She was there for the wrong reason.”
Christopher Stevens, Daily Mail