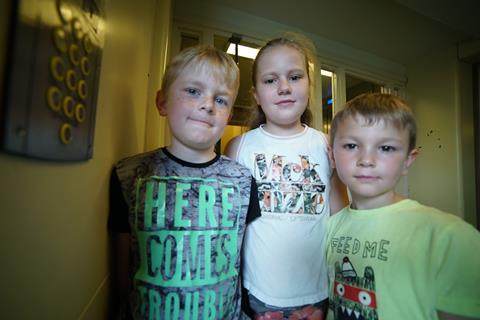 “Tower Block Kids put human faces to issues and environments that can feel abstract to those with no experience of them. Equally valuable, it was a tribute to the astonishing resilience and cheerful adaptability of children. I hoped they would be OK, and hugged mine a little tighter after watching it.”
Gabriel Tate, The Times

“The practical difficulties of their various lives were a constant theme. They had mums and dads who loved them and worked hard to give them what they needed but no one seemed to have enough space, inside or out.”
Matt Baylis, Daily Express

“What struck me most was how the intimacy and directness of Katherine Rundell’s delivery was reflected in an approach that was, perhaps, more honest than we’re used to from our television history, where extrapolations and educated guesswork based on often-scanty evidence are presented as simple fact.”
Gabriel Tate, The Times

“Rundell was able to bring the storyteller’s touch to this grim episode and to be honest, it might have been pretty thin without her. As it was, the lengthy interviews with various experts on Tudor theatre and labour laws reminded me og how female roles were played on stage at my all-boys’ school in the early Eighties. With a lot of stuffing anf padding.”
Matt Baylis, Daily Express

“The catharsis found in seeing the cluttered shelves reorganised is why programmes such as this are so popular, along with the chance to see the underdog fight back (after all, Poundstretcher is still a family run business). But let’s hope that there’s an examination of the wider issues in the next two episodes. Otherwise all this effort could be for nothing.”
Catherine Gee, Daily Telegraph

“The first run of episodes is fine, but let’s treat them as . Soon enough, the writers will start writing for the performers, the characters will start to pop, the show will lose its compulsion to push buttons for the sake of it (the opening 15 minutes alone feature fistfights, stabbing, heavy petting, hanging and two separate peeping Tom incidents) and it wll settle into something special. There is promise in Disenchantment, but we will have to wait for it to be realised.”
Stuart Heritage, The Guardian

“Even into its fourth run, this is a solid comedy that, unusually, still manages to find life – and fun – in its format.”
Catherine Gee, Daily Telegraph