“The script contained some sharp-edged one-liners, and the show’s strong cast delivered them well.” 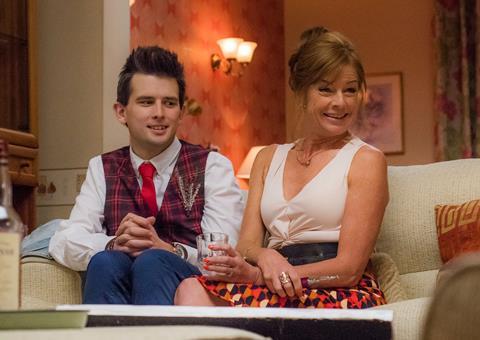 “The debts to everything from Abigail’s Party to The Royle Family are perhaps too openly worn on its sleeve. Yet what it lacks in innovation is more than made up for by a warm heart. There are some nice, dry one liners and an expert ensemble cast, who manage to make you if not quite laugh out loud then at least gently smile in recognition.”
Sarah Hughes, The i

“The script contained some sharp-edged one-liners, and the show’s strong cast delivered them well. Not all of the material was funny, but the acting carried it.”
Chris Harvey, The Telegraph

“It is, as Joey Tribbiani would say, some gentle comedy, dude, although it’s still an exquisitely accurate rendering of the claustrophobic horror that masquerades under the benevolent title of neighbourliness.”
Lucy Mangan, The Guardian

“I hated almost every minute of this distressing 90-minute documentary, but what an outstanding piece of work it was. No commentary or voiceover, just inadequates hoisting themselves with their own petards.”
Carol Midgley, The Times

“A superb film that included some of the most upsetting footage imaginable. This documentary had no voice-over. How could it? No words could express contempt deep enough for the act of cold cowardice we had seen.”
Christopher Stevens, Daily Mail

“One of its contributors, Will Travers of the charity Born Free, criticised the BBC for showing it, claiming it is one-sided, but Trophy offered no easy answers. It was painful and thought-provoking. Everyone should watch it.”
Chris Harvey, The Telegraph

“Panorama is supposed to be an investigative programme, but there was nothing new here, no analytical depth – nothing much at all beyond a harrowing of souls. That is valuable in its own way, of course, but this felt too fleeting to be much use to anyone.”
Lucy Mangan, The Guardian

“This disjointed film was compressed much too tightly into its 30-minute slot. Narrated by actress Maxine Peake, it included the startling statistic that one in 20 pregnant women in Britain today is addicted to drugs or alcohol. But it had no time to examine that figure in context, by looking at the knock-on effects on homelessness, crime and the benefits culture.”
Christopher Stevens, Daily Mail