“Straddles nihilistic noir and Midsomer twee, an impressive balancing act in which popular appeal doesn’t come at the expense of character, warmth or intelligence” 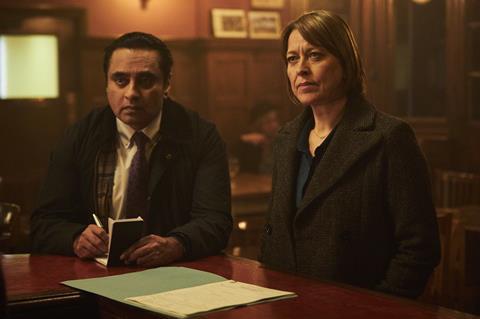 “The sight of Nicola Walker’s soulful bloodhound eyes as DCI Cassie Stuart, our burnt-out, PTSD-suffering detective, triggers a warm sense of familiarity and ‘getting back to normal’ after months of Covid-necessitated repeats and cobbled-together TV schedules. With Chris Lang’s creation we are on a promise: quality dialogue, quality misery.”
Carol Midgley, The Times

“Plausibility is one of the many good things about this show. Oh, the blessed relief of watching a detective drama in which the detectives are free of quirks and the script is free of gimmicks, where colleagues can work together without simmering sexual tension or screaming rows, and where the lead character happens to be a woman without that being A Remarkable Thing.”
Anita Singh, The Telegraph

“Unforgotten packs more tasty goodness into a small space than any of its rivals. Previous series have been stuffed with big names — the likes of Sir Tom Courtenay and Trevor Eve. This year’s cast is lighter, though it does feature Sheila Hancock as a bedridden, malevolent old snob, indiscriminately vile to her carers and her daughter.”
Christopher Stevens, Daily Mail

“I love how the show’s creator, Chris Lang, captivatingly sketches the lives of four apparent strangers, challenging us to work out what they’ve got to do with the corpse. Fingers crossed, Cassie’s return will also mean that she will yet again do her Columbo homage, turning bloodhound eyes and mirthless smile on a suspect at the threshold to ask them one last question.”
Stuart Jeffries, The Guardian

“With its troubled cop, bunker-room briefings and the inevitable twist ending there was little to distinguish it from any other murder mystery on TV. All good detective shows have a penny-drop moment and this one was enough to secure my attention for at least another week. After that, the show will have to work twice as hard to keep me watching.”
Emily Baker, The i

“Jamie Oliver’s second round of Jamie: Keep Cooking Family Favourites was a much-needed source of inspiration – gentle, a treat for the eyes and straightforward enough for even the most culinary challenged to follow.”
Emily Baker, The i

“Big Sky is obviously a teeny bit of a departure for a streaming service that has to date marketed itself as the home of wholesome family fare. As if to underscore that point an otherwise cliché-devilled and predictable opening episode concludes with a jaw-dropping twist straight out of Game of Thrones. Disney + subscribers may be intrigued to stumble upon a hokey yet very adult thriller amid the avalanche of Marvel spin-offs and Star Wars cartoons. Yet that novelty is sure to wear thin as Big Sky lurches from wacky to tacky. If this is Disney’s opening salvo in a campaign to conquer streaming for grown-ups, Netflix can rest easy.”
Ed Power, The Telegraph