Uprising; Secrets of the Museum

“The films aren’t just history but a warning against complacency” 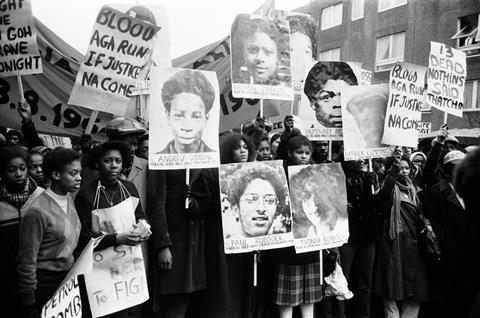 “Uprising — Steve McQueen’s new trilogy of films about racial unrest in 1981 (co-directed with James Rogan) — feels depressingly well timed. The films aren’t just history but a warning against complacency. That perhaps makes it sound like worthy gruel, except that McQueen’s documentaries, it turns out, are just as vivid as his TV dramas, the Small Axe pentalogy.”
James Jackson, The Times

“It is expertly done, pieced together in relay, as each person picks up a thread and weaves it into the overall picture. It chooses its details carefully, adding personal touches, layering on the kinds of anecdote that culminate in a full picture of a life.”
Rebecca Nicholson, The Guardian

“McQueen’s interviewees described trying to exist, and even thrive, against this backdrop of increasing hostility, until those who were eyewitnesses and survivors of the fire recounted the most horrific memories imaginable. It is a crushing story, masterfully and movingly told by the people who lived it”
Rachael Sigee,The i

“The story of the fire is told through well-chosen archive footage from the time, some reconstruction, and the eyewitness accounts of survivors, which are filmed in a very sparse set, their testimonies to being almost burnt alive bringing those awful moments back life.”
Sean O’Grady, The Independent

“With the potential perpetrators never brought to justice, a less civic-minded film might have framed the events of January 18 as an unsolved mystery. But there was no true-crime cliché here, with McQueen and co-director James Rogan essentially creating a deeply affecting oral history.”
Ed Power, The Telegraph

Secrets of the Museum, BBC2

“This is gentle viewing and comforting to watch, safe in the knowledge that these people know exactly what they’re doing, with moments of tension extending to a wobbly trolley ride for said Michelangelo model back to the galleries (although if you find being in a china shop stressful, this will push all your anxiety buttons). There was rather a dearth of non-white voices, no doubt a reflection of the lack of diversity across the wider museum sector, but the specialists featured were impressively skilled, in particular textile conservator Jo Hackett, whose painstaking precision needlework was astonishing. In a time when some have become sceptical of experts, this was a thoroughly satisfying showcase for world class expertise.”
Rachael Sigee,The i