Walk The Line; Close to Me; I’m a Celebrity… Get Me Out of Here; You Don’t Know Me

“There was a pre-Christmas giddiness to the whole thing that, with social lives dwindling again, might be just what the British public fancy right now” 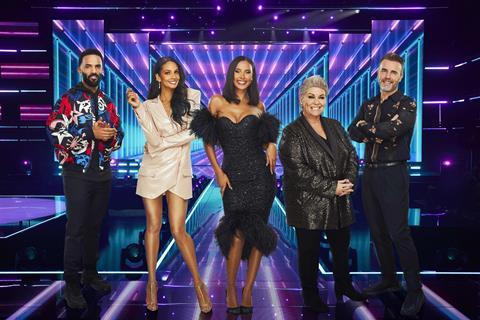 “So far, the concept looks unfinished. There’s far too much build-up to each song, performances last just 90 seconds, and — thanks to needlessly complicated rules — we sit through endless explanations from overworked host Maya Jama. But all quibbles ceased when the final contestant, hospital admin assistant Ella Rothwell, took the stage. She sang a song she’d written herself, a throaty tune called I Wonder If You’re Happy, as good as anything on Adele’s latest album.”
Christopher Stevens, Daily Mail

“The acts are very watchable (mostly talented semi-professional performers who could really do with a boost after the last two years), the judging was solid and there was a pre-Christmas giddiness to the whole thing that, with social lives dwindling again, might be just what the British public fancy right now. Maybe after a mulled wine or four, it might even start to make sense.”
Rachel Sigee, The i

Close to Me, Channel 4

“What I find totally unacceptable is Close to Me’s lighting bill. At one point, Jo, having fled hospital after another collapse, returns to the family home. As she wanders the sumptuous modernist house like Bluebeard’s wife in the marital castle (or like a Right Move video tour of a property in prime Sussex that would set you back – oooh – £2m plus), room after room is lit with decorous lamps. I counted 20. This is the real reason why energy companies are dropping like flies. Channel 4 drama set designers don’t realise that you actually have to pay those fuel bills”
Stuart Jeffries, The Guardian

“Every time it seemed like it was getting somewhere we were dragged back to Groundhog Day or a scene fading into another non sequitur. If the idea was to emulate the fuzzy, frustrating vagueness of head injury-induced memory loss as suffered by the irritating Jo (Connie Nielsen), then it succeeded.”
Carol Midgley, The Times

I’m a Celebrity… Get Me Out of Here, ITV

“Unfortunately for the reality franchise, it’s an indictment of this damp squib series that a few irreverent one-liners from the presenters proved far more interesting than anything the actual contestants did. This was a staycation edition for the second year in a row, swapping the Australian jungle for historic Gwrych Castle in Abergele. The action was approximately as eventful as, well, a wet weekend in Wales.”
Michael Hogan, Telegraph

“What this drama has done skilfully is realistically to evoke the thin membrane between normal domestic life and utterly evil criminality, showing how they live cheek by jowl, just coexisting. Hero says he didn’t kill Jamil and tonight we’ll discover who did. It may surprise you.”
Carol Midgley, The Times