Christmas at Castle Howard; The Lie: Murder In Suburbia; Between The Covers; Selling Tampa; Love It Or List,

“Basically a sales brochure for the castle’s Christmas in Narnia experience.” 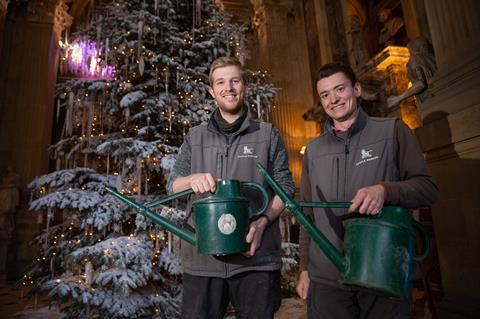 “Was basically a sales brochure for the castle’s Christmas in Narnia experience. This, on enquiry, still has tickets available, which might be because once you’ve watched an hour-long documentary showing how the experience was put together, and then followed cameras along a quarter mile of corridors and in to the sumptuous great hall to see the tree, and Aslan, and the Wardrobe, you’ve basically had the experience. The programme did, at least, try to give viewers something extra by utilising all of the best tricks from the factual TV playbook. Interest was piqued for young and old”
Benji Wilson, The Telegraph

“It has an undercurrent of panic as earls and barons wonder if they will make enough to fund restoration work…The decorations were lovely, but the air of pulling together in the face of adversity didn’t quite come off (Heartwarming? Not really – but at least it gave another chance to snoop inside someone else’s massive house”
Barbara Speed, The i

The Lie: Murder In Suburbia, Channel 5

“The style of this documentary did occasionally tiptoe towards the schlocky, suspense-building US crime documentaries, with repetitions after every ad break, but overall it was a thorough job given added gravitas by the fact that Rachel’s distraught mother, father and brother were interviewed.”
Carol Midgley, The Times

“Even viewers who knew nothing of the case will have shared those instincts, from the moment we first heard Joe’s clumsy phone messages to his wife before her body was found…It’s a strange story, but this programme adds little to it.”
Christopher Stevens, Daily Mail

Between The Covers, BBC2

“It does a decent job of eschewing pretentious earnestness and evoking the casual style of a book club down the pub, but without, I think, any wine (unless I was wrong about the liquid in those glasses). I don’t know why it needs Sara Cox to make lame puns or say that guest Fleur East has “more talents than Winnie the Pooh’s recycling bin has honey pots” (Eh? What?), because people are only here at 7pm on a Wednesday for the books.And it was a decent, varied selection for this final episode… But it is a bit dull when they all agree that the books are wonderful…Come on, we want rows, slatings, blood on the carpet! See, this is where the wine comes in.”
Carol Midgley, The Times

“The key ingredients are all in evidence: great clothes, huge houses, sunny brunches, high production values, awkward flirting with clients, and big egos vying for dominance (and commission)…perhaps the biggest nod to the real world and jobs that aren’t rewarded with a $300k commission per sale, the women have lives, relationships and children which they have to balance with work, all while under the fierce, often bitchy scrutiny of their peers. More than anything, though, it’s fun watching ambitious women doing their glamorous, outrageously paid jobs and fighting to be top dog – something that’s still strangely rare in the world of reality TV.”
Barbara Speed, The i

“It is a format that could run unchanged for decades. Every episode is the same: a couple who have outgrown their home must decide whether to extend and renovate, or simply move somewhere else, while Phil and Kirstie offer conflicting advice. But every episode is also different, because no two couples are alike.This show was devised to blend house-hunting with DIY tips, but the real pleasure is in nosing around other people’s homes and marvelling at the way they live. It’s all very watchable.”
Christopher Stevens, Daily Mail