​I Literally Just Told You; The Witcher; One Night in Alton Towers

“Carr is a quick, funny host, on this occasion even sparing us his honking-mule laugh” 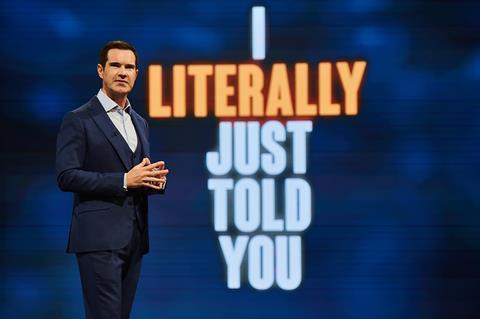 I Literally Just Told You, Channel 4

“At a time when you can’t move for lame quiz shows, this one’s not half bad (I’d say the same about Richard Osman’s House of Games: I think it thrashes Pointless for entertainment value). It doesn’t depend much on general knowledge or smartarse nerdery, but on people’s powers of observation and memory…Carr is a quick, funny host, on this occasion even sparing us his honking-mule laugh.”
Carol Midgley, The Times

“There are no new ideas under the sun – this one is essentially a version of the observation round from The Krypton Factor – but at least it feels different. It’s fun and doesn’t take itself too seriously, with Carr getting the tone just right as he gently mocks the contestants without being remotely cruel. I’m not sure it has the potential to run for several series, but it works for now.”
Anita Singh, The Telegraph

“Jimmy Carr’s quiz game format needs some fine-tuning, but it’s far from hopeless…Even though Jimmy kept reminding us to remember everything, it’s hard to fix the trivia in your mind when the facts are flying so fast. Photos of celebrities popped up and players had to guess whether they were alive, dead or fictional.It’s a tasteless round, but Jimmy Carr is hardly known for his good taste. Not everything worked. Goodness knows why Eamonn Holmes was in the audience.”
Christopher Stevens, Daily Mail

“The Witcher has ways of keeping your interest up, though. Naked bodies are the standard sweetener in the swords-and-horses genre, along with freely pouring blood, and this show does have both. But it prefers to deflate its own pomposity with blunt comedy…Even the three main characters, much as they gravely go on about prophecies and dynasties and whatnot, can display an admirable economy of speech – which offsets the grandeur of the landscapes, the palaces and the protagonists’ voluminous capes.”
Jack Seale, The Guardian

“Game of Thrones required the viewer to keep track of shifting alliances and of many bare bottoms. Neither are on the menu in The Witcher. If it resembles anything it is a kind of hyperactive Grimm Brothers fairy tale, as Geralt and Ciri venture into the deep dark woods in search of monsters to biff. And so, amid a king’s ransom of fantasy shows, the series carves out a niche of its own. It’s a no-holds-barred beat-’em-up brimming with bad monsters, bad men and bad hair.”
Ed Power, The Telegraph

“It does manage to translate the quest structure of a video game fairly successfully to TV. That panache is visible in the very design of The Witcher. The colours have a brightness that at times feel almost like a comic book. Every character is lit with the audience’s eyesight in mind. All of this allows the viewers to see the beautiful, expensive landscapes, and the equally beautiful, expensive cast, who seem to have been assembled as a supergroup of high cheekbones, the Cream of bone structure. For all that the acting and writing is frequently ropey…it has the pleasantly self-effacing air of a show that knows its first season wasn’t a home run.”
Nick Hilton, The Independent

One Night in Alton Towers, Channel 4

“I did enjoy, in a strange masochistic way, watching Widdicombe and Brooker suffering what I couldn’t bear to. It was gently funny too; the pair of them, waiting for the 70mph horror-drop into a black hole, telling each other “I love you” like Thelma and Louise before going over the cliff…It’s silly, but it kind of works. Plus I’m guessing Alton Towers needs all the puffery it can get, with Covid doubtless keeping many people away.”
Carol Midgley, The Times

“What left me nauseated was the trio of middle-aged comedians pretending to be giddy teenagers. Roisin Conaty is 42. Alex Brooker and Josh Widdicombe are 37 and 38 respectively…But they are way beyond the age when they can get away with acting like schoolchildren on an end-of-term trip.To see them cramming handfuls of lurid sweets into their mouths and giggling about sugar rushes was deeply odd.”
Christopher Stevens, Daily Mail