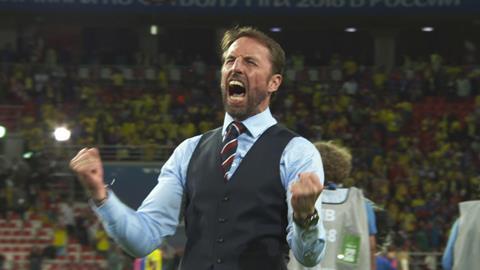 “With great access and artfully-shot, dramatically-framed contributions from Gareth Southgate (no waistcoat this time: instead a seasonal poloneck) and the team, this should have been a happy, boosting reminisce. The problem was, really, commentary that came from the likes of Julie Etchingham, Susanna Reid, Sir Clive Woodward and Piers Morgan. Most of them fine and pleasant, but not expert nor particularly insightful.”
Sarah Carson, The i

“ITV’s hour-long retrospective of England’s World Cup campaign was, to borrow the parlance, shooting at an open goal. It didn’t miss. If it was stirring to relive the heady days of the too-hot summer when the England football team actually over-achieved, it was even more stirring to hear once again the sage words of manager Gareth Southgate.”
Benji Wilson, The Telegraph

“The last time I reviewed Celebrity Call Centre I gave it one star and said I couldn’t remember when I’d last watched an hour of such fatuous barrel-scraping dross. The good news is last night’s Christmas special was an improvement in that it contained a better class of dross.”
Carol Midgley, The Times

“Being celebs, of course, they did a good deal more talking than listening, though they did all seem to be eavesdropping on each other’s calls. Debbie McGee, whose husband Paul Daniels died in 2016, was particularly good at offering condolence.”
Christopher Stevens, Daily Mail

“For all its smug cosiness, I rather loved it. There is something terrifically soothing about cooking programmes, especially at Christmas time, so watching Oliver fluff up a potato in a colander, remove stuffing from a cake tin and squash simmering giblets with a spoon felt meditative rather than instructional, even if the techniques were, too, quite straightforward.”
Sarah Carson, The i

“What was best about this Imagine…, however, was that it didn’t settle for merely establishing Levy’s position as an author of worth: it also tried to show you what she is like. Yentob is generally derided for his pretensions but here he drew the best out of his subject: Levy came across as a great ironist, with a sly sense of humour and a winning candour.”
Benji Wilson, The Telegraph

“A seasonal mashup of bizarre, off-beat and outside-the-box yuletide meals, many eaten by people who were prepared to celebrate Christmas in July for the benefit of the cameras. This was the sort of seasonal fare that comes in handy when your brain starts to turn to mush: deeply undemanding, sporadically interesting and larded with excruciating puns.”
Tim Dowling, The Guardian