“How much more engaging than any dry textbook is this continuing buffet of quality documentaries?” 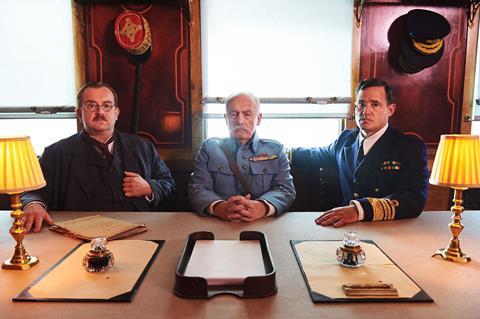 “How much more engaging than any dry textbook is this continuing buffet of quality documentaries? Last night’s WWI: The Final Hours was no different, explaining the three-day long armistice negotiations and the ‘de-fanging’ of Germany in a railway carriage near Paris in a much more compelling way than I can recall being taught at school. I prefer the old, jerky black-and-white reels any day, though, over those stagey reconstructions, which can feel a bit Sussex am-dram.”
Carol Midgley, The Times

“There were some good background details and useful perspective offered by historians Hew Strachan, Kwasi Kwarteng and others. But not enough. In the end this was a disappointingly ordinary documentary about an extraordinary moment in our history. It would have been better had less time been spent on the personalities of the negotiators and more on analysing the political forces at work behind the scenes.”
Gerard O’Donovan, The Telegraph

“Expertly restored footage of the peace celebrations brought a spark of relief in this bitterly dour documentary. The message was very clear. Remembrance Sunday, this year above all, is not an occasion for celebration, much less triumphalism. It is a time for reflection on the sacrifice of many millions of men and women, on the home front as well as on the battlefields.”
Christopher Stevens, Daily Mail

“The bad news is that we’re still in the lobby awaiting lift-off. I don’t mean of a rocket, but of anything resembling a compelling plot. What we got was a lot of talking, pondering and flashbacks fleshing out Tom Hagerty’s (Sean Penn) sad backstory. Nothing wrong with that — Penn continues to be the best thing in this drama and 100 per cent committed to every line — but what we lack is any momentum or sense that this will go anywhere interesting enough to warrant investing six more hours of viewing time.”
Carol Midgley, The Times

“Westside, Netflix’s first unscripted reality show, is filmed as a documentary but is interspersed with musical numbers, usually involving one of the members singing out their personal problems or expressing in song their latest beef with A N Other. Imagine Glee trying to be gritty. These numbers are professionally written, produced by a high-end team behind the scenes and as uniformly dreadful as you could wish. And yet. And yet. Westside grows on you. Amid the histrionics and performative nonsense there are some genuinely shocking moments.”
Lucy Mangan, The Guardian