Year Of The Rabbit; War on Plastic with Hugh and Anita; Big Little Lies

“At times, it feels like an excuse for a marvellous cast to ham it up with some daft capers but for the most part this is great, lively fun.” 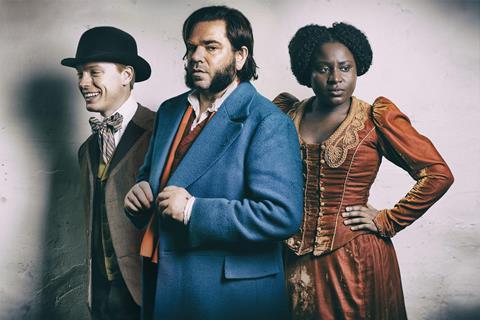 “It’s Ripper Street with knob gags in, and Keeley Hawes as an evil crime boss to come. What, unless of course it isn’t your sort of thing, is not to like?”
Jasper Rees, The Telegraph

“Despite his attempts at a Cockney accent, Matt Berry plays the same character as ever — barely different from his vampire in Sunday night’s What We Do In The Shadows. The lack of variety doesn’t matter much, because he’s always funny.”
Christopher Stevens, Daily Mail

“Berry is pleasingly bellowing and dismissive and bad-tempered as Inspector Rabbit. At times, it feels like an excuse for a marvellous cast to ham it up with some daft capers but for the most part this is great, lively fun.”
Sarah Carson, The i

“Beneath its vulgar, frenetic energy, something seemed to be misfiring. There were a few genuinely funny moments – the Elephant Man appearing as an informant, for one – but there were more gags that I simply watched tumbleweed by.”
Tim Dowling, The Guardian

War on Plastic with Hugh and Anita, BBC1

“Hugh has been consistently at the forefront of the fight against waste, in particular with his campaign against waxed paper coffee beakers three years ago. But uncovering the truth of what happens to at least some of our rubbish, when we believe it is being responsibly recycled, took him into a new league of investigative journalism.”
Christopher Stevens, Daily Mail

“For once I won’t grumble about TV documentaries’ addiction to japery to make points because War on Plastic with Hugh and Anita had such very good points to make. It was delectable too to see a Tesco bigwig failing to explain why loose fruit and veg is nearly twice as expensive as plastic-wrapped. We need more programmes like this.”
Carol Midgley, The Times

“It was a masterstroke to cast Meryl Streep as Mary Louise. She’s a ruder, more sinister Blanche from Coronation Street and you just know she will root out what really happened to her son. And what an excellent first episode; out of the traps like a greyhound and with great dialogue — no second series slump here.”
Carol Midgley, The Times

“Everything is delicately chosen: each needling line of dialogue, each song, each lush, sweeping shot of the beach, each ray of light that shines through Kidman’s hair as she talks to her therapist. One of Big Little Lies’ great strengths is its restraint – every woman’s actions is measured, every emotion tempered, and tension hangs thick in the air in every scene because of the unsaid.”
Sarah Carson, The i

“The little flecks of poison in a put-down at the school gates, in a roll of the eyes in the local estate agent are the moments that bring this star-studded drama from writer David E Kelley to teeming life, where the acidity of prosaic human interaction is turned up just a couple of notches on the dial from how we experience it in reality to mesmerising effect.”
Serena Davies, The Telegraph